Here’s your guide of Where to Eat on the Las Vegas Strip. If you need some ideas of where to eat while you are in Sin City, this is your guide.

So in March I was able to take a trip to Las Vegas for work. You know with that opportunity I went a couple of days early to eat my way through Sin City. Today I’m sharing my recap on Where to Eat on the Las Vegas Strip.

Having never been to Vegas, I wasn’t sure what to expect. It’s definitely not like the movies portray it. Everything is a lot bigger and further spaced out – I thought the strip would be a shorter distance but I was wrong.

Since I was here for the food, straight off the plane I went to try Gordon Ramsay’s Fish and Chips. Even if I hadn’t been there during Lent, I still would have sought out this place because I love Fish and Chips. The location itself is small but it’s a cute setup. 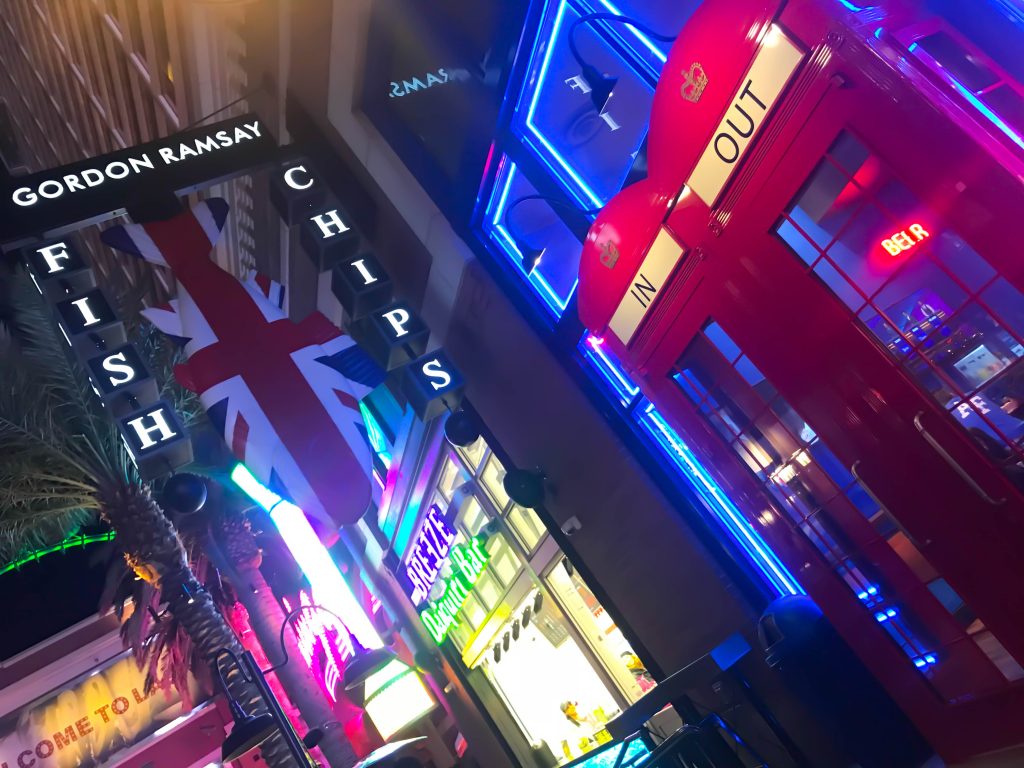 The fried fish was crispy, light and not greasy at all. Pretty much the best fried fish I’ve ever had. The lemonade offered was also refreshing and had a nice zesty flavor to it. I only wish I could have been able to try his burger place too. Next trip for sure.

My breakfast plans changed Saturday morning and I ended up going to Wahlburgers because I wanted to get my sister a souvenir as the girl loves her some Marky Mark. Since it was still early, I got a fried egg on my burger. Obviously. The tots could have been warmer but the Wahlburger Sauce made up for it. 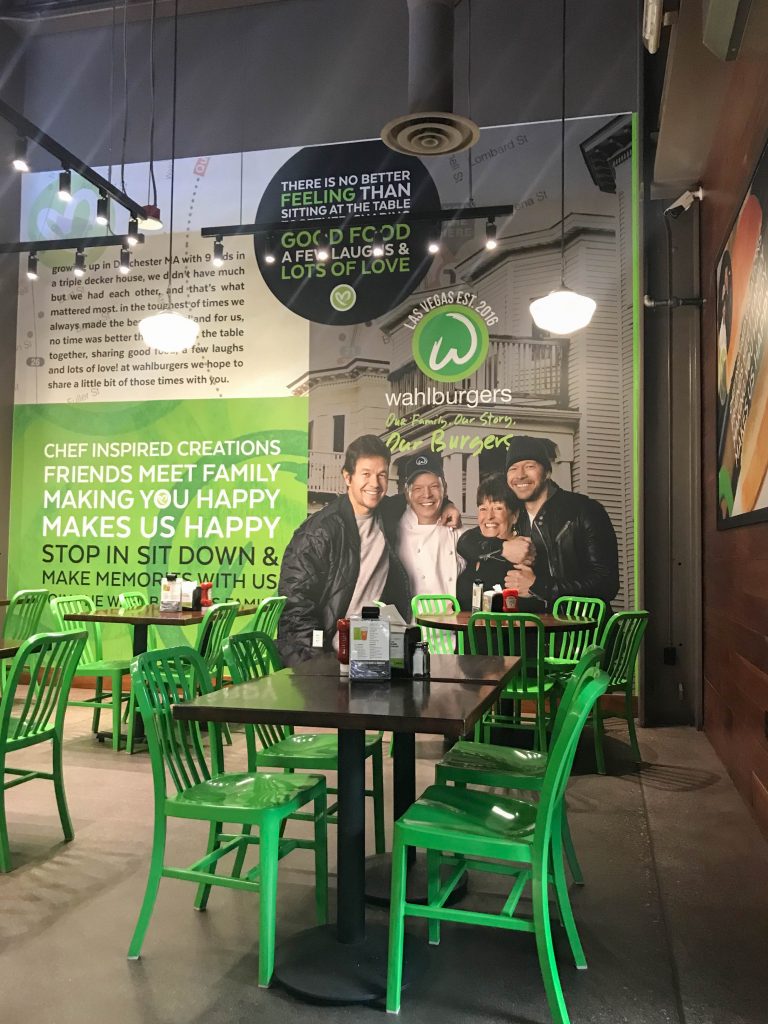 After doing a bit of walking along the strip, I headed to Bouchon Bakery at the Venetian. Do yourself a favor and pick up a treat at this bakery. I had the Strawberry Sesame Macaron and it was unbelievably tasty.

While in Vegas I had to stop at Black Tap Las Vegas to try one of their Crazy Shakes. After having them in New York I was anxious to try it again. 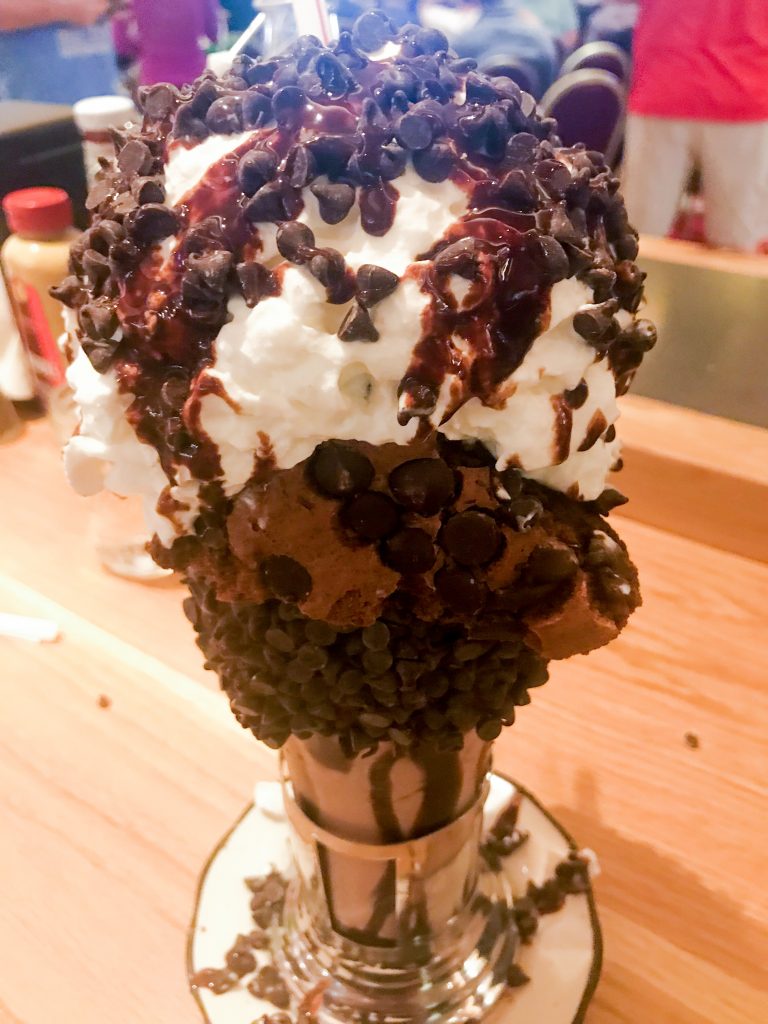 This Brooklyn Blackout was so rich and delicious. My only complaint was that the brownie was too cold and hard to enjoy. I also needed a bigger plate than what it was served on because it started dripping all over the place. Still a treat though and to have to try their shakes at least once!

Probably my most favorite meal I had in Las Vegas was at Buddy V’s. This restaurant is from the Cake Boss. I was so looking forward to having the Bucatini Carbonara. Yes I am one of those people who checks out the menu in advance in anticipation of a visit. I was so disappointed when I got there and they were only serving a buffet brunch and limited menu. The bartender/waiter was so accommodating and asked the chef if I could order it and he made it for me! Let me tell you, oh em gee, this was heaven on a plate. The creamiest pasta I’ve ever had. I mean, seriously, look at that sauce. 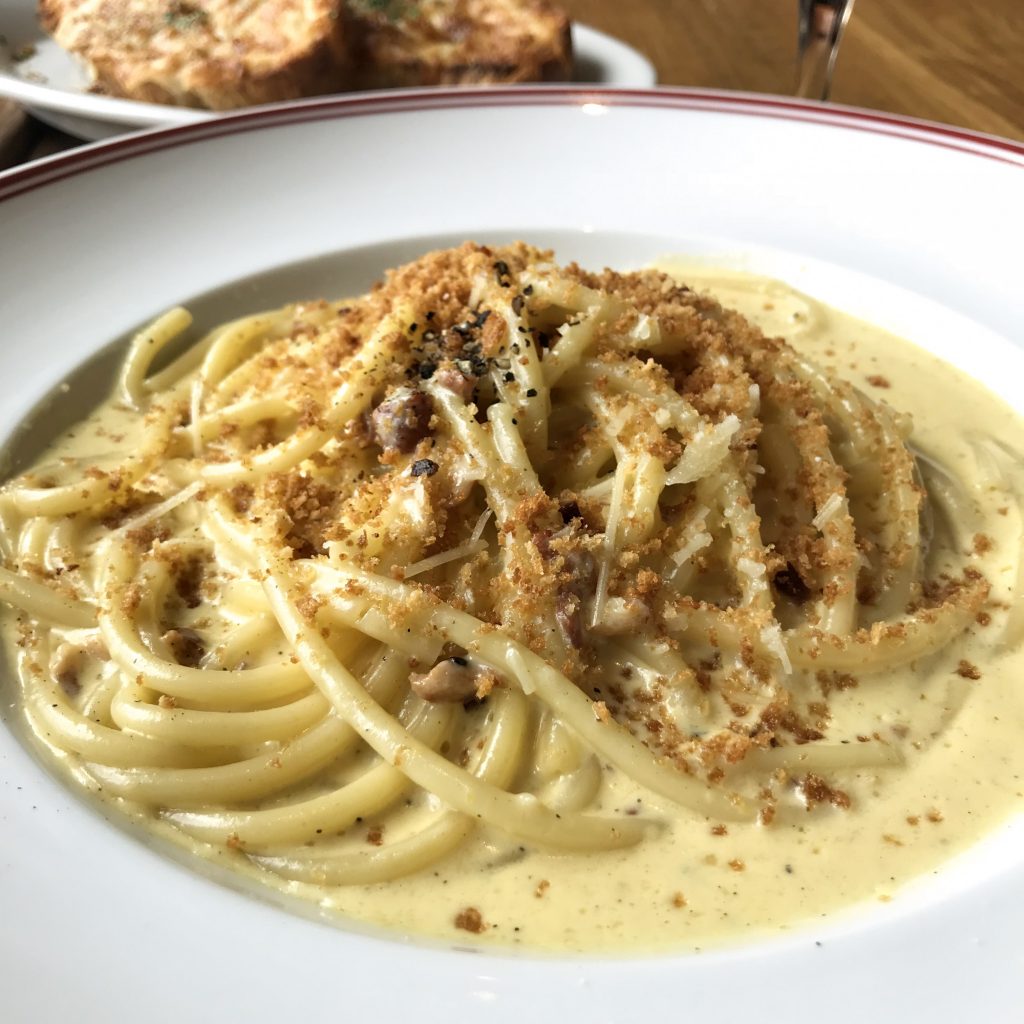 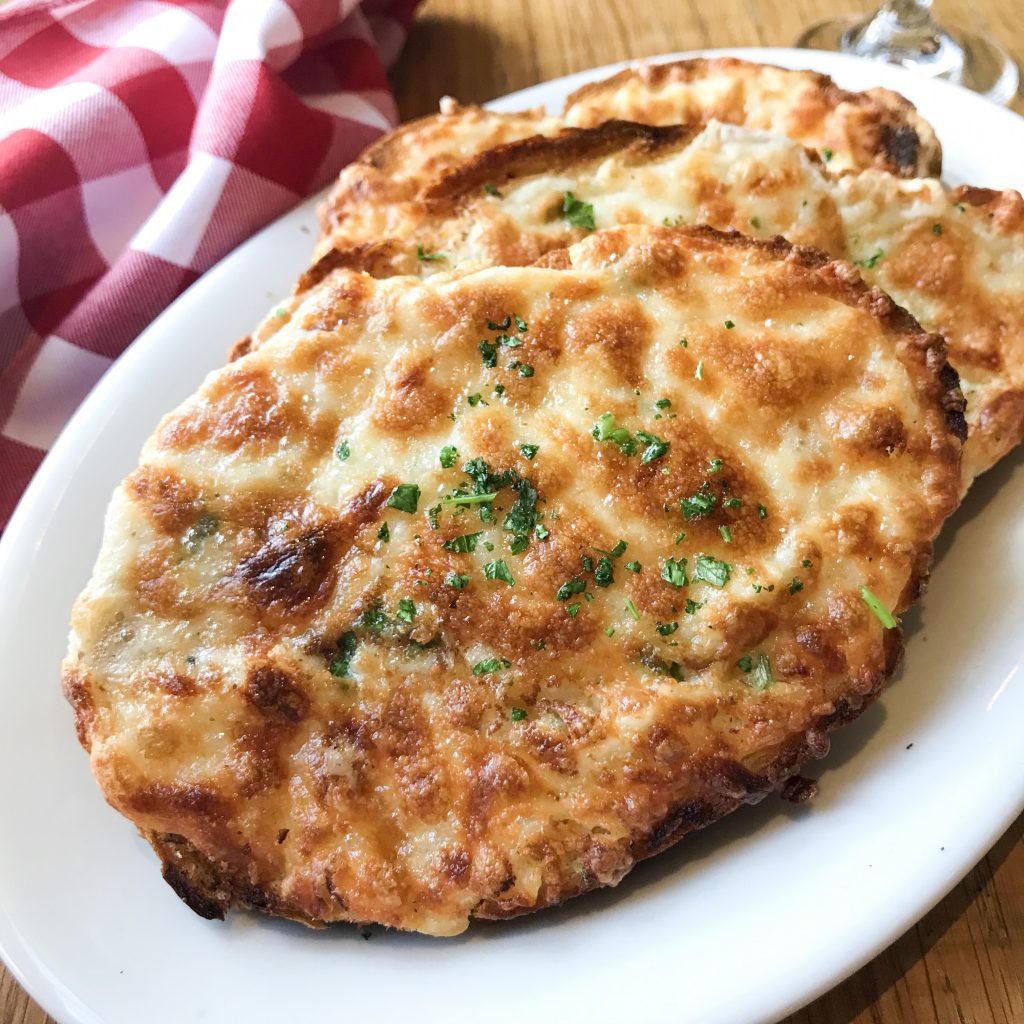 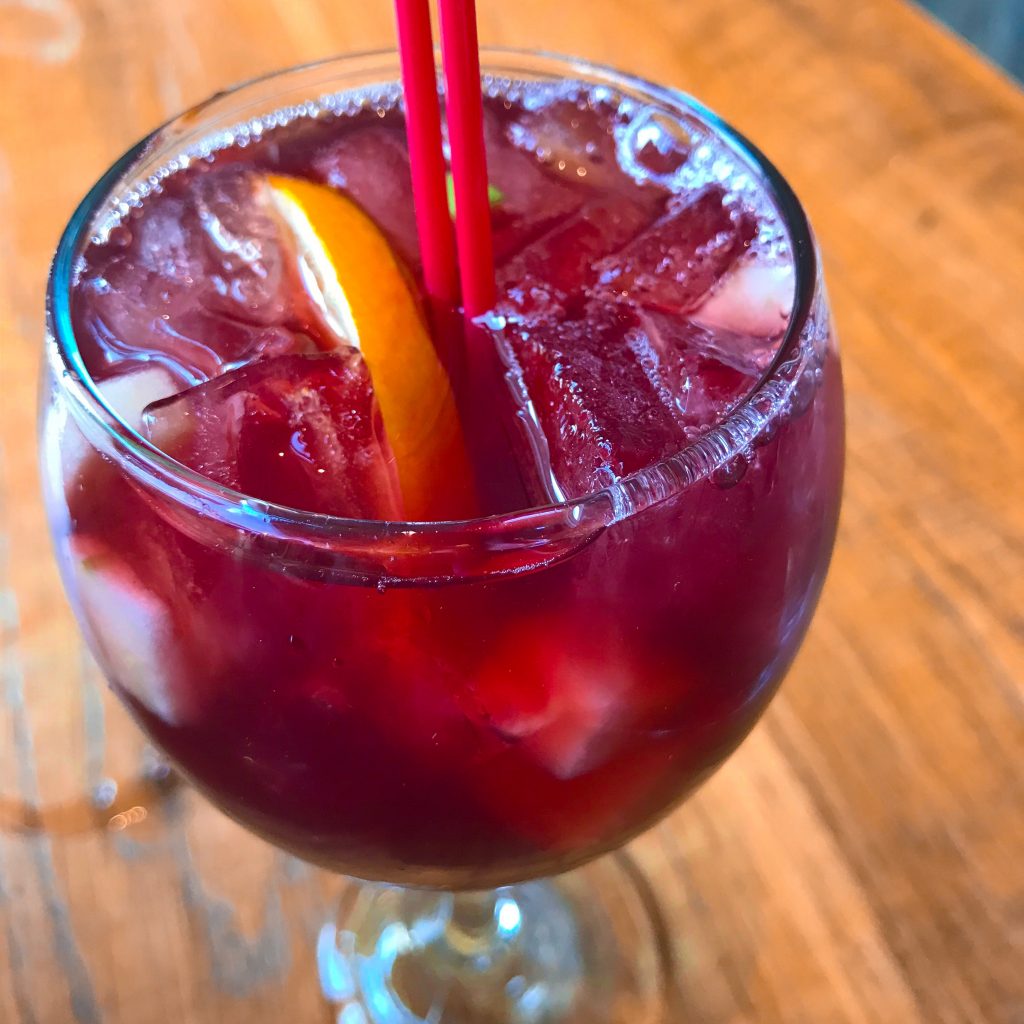 I also couldn’t resist the garlic bread and I’m so glad I didn’t. One word: phenomenal. The sangria was also superb. Do yourself a favor and go here if you are ever in Las Vegas. Trust me.

As with most of the food I ate in this trip, I shared the leftovers with some homeless or needy people and as I was handing this bag over, I kept thinking oh you’re going to love this!!

If you need a little sweet treat to get you going for those long walks down the strip, you can grab a slew of delights at any of the following. I highly recommend them: 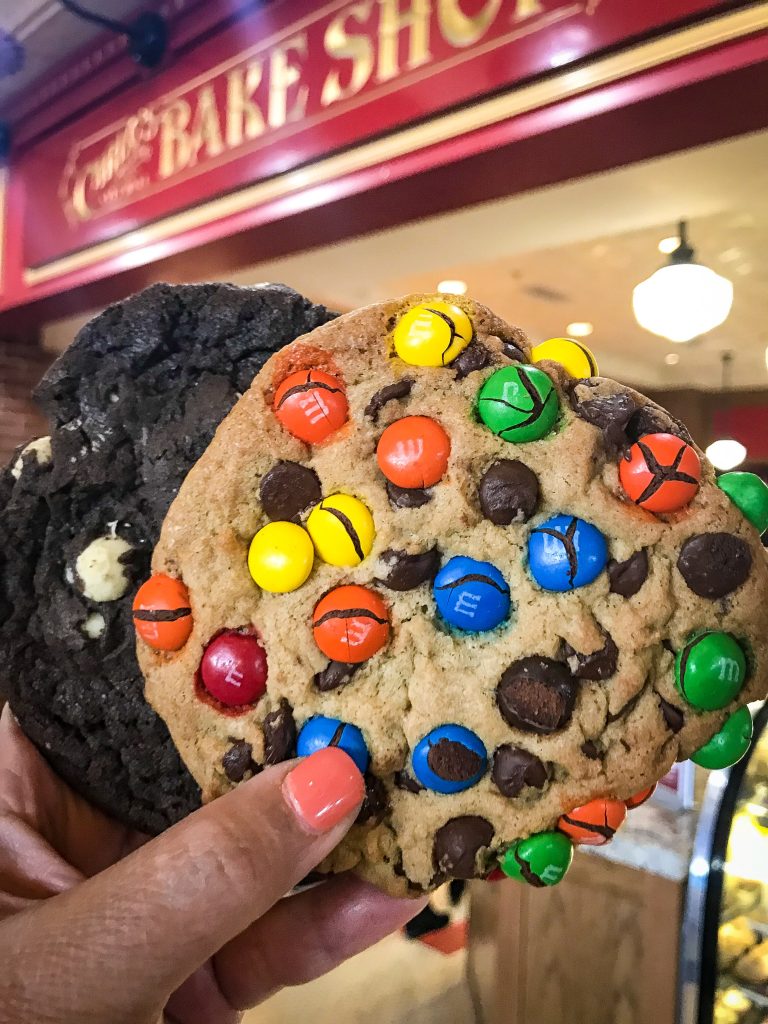 Carlos Bakery has so many sweets to choose from and they are right across from Buddy V’s. I grabbed a couple of cookies for a late night snack. And I also made a copycat of the M&M Cookies.

My first experience at Milk Bar and I wish I had gotten more to bring home for friends and family. I didn’t plan to eat the entire slice of cake I bought but I did. I sat in front of the Bellagio watching the water show and gobbled it up it was that good. 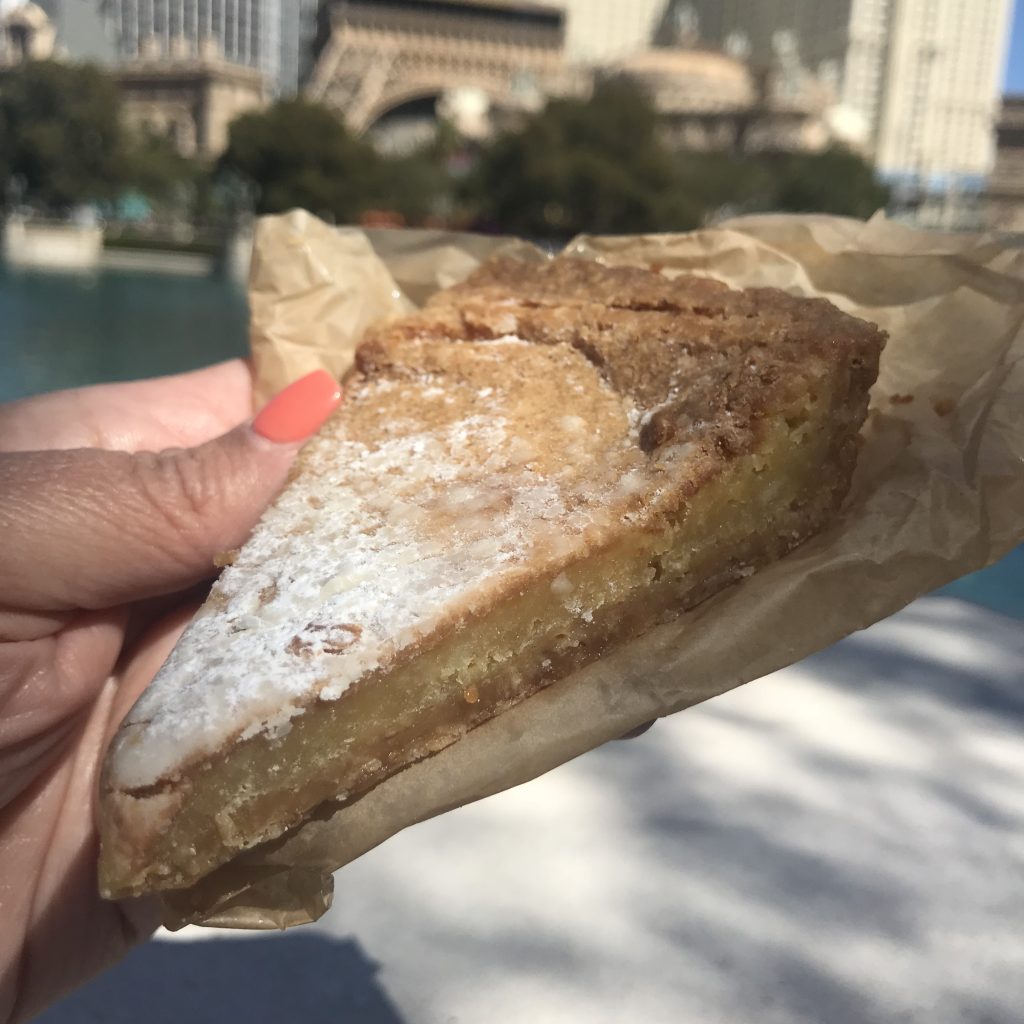 I went in search of donuts on the strip and found Pink Box Donuts. The salesperson told me their most popular item was the cronut so I got it and absolutely loved it. I woke up in the middle of the night wanting another one. 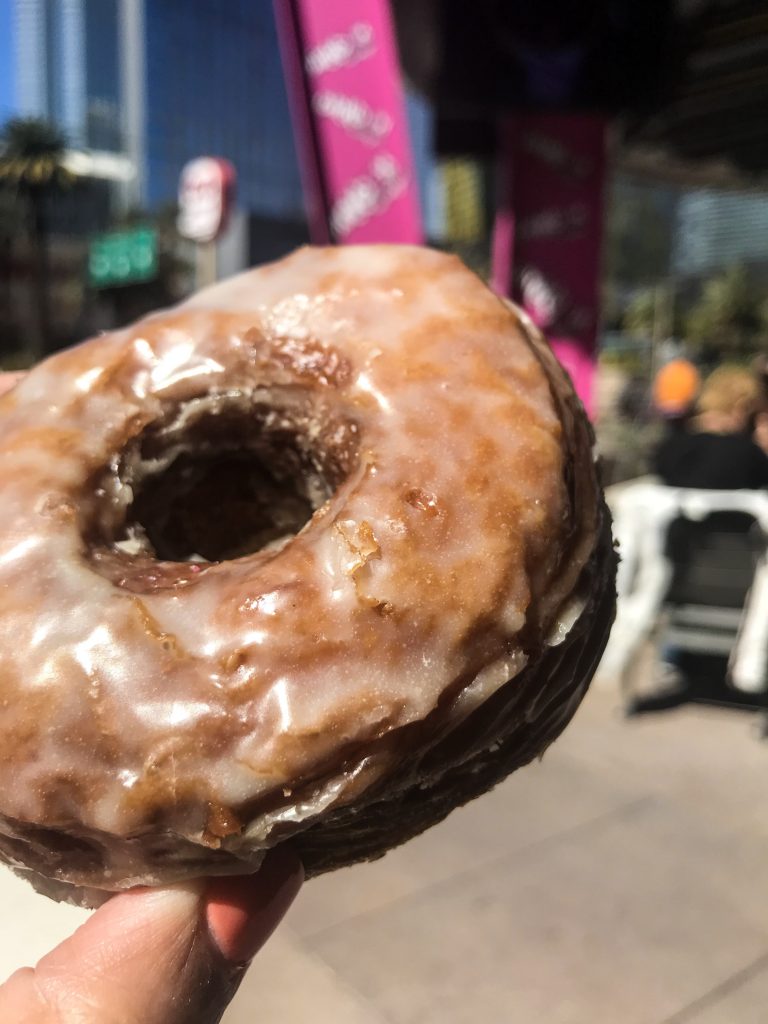 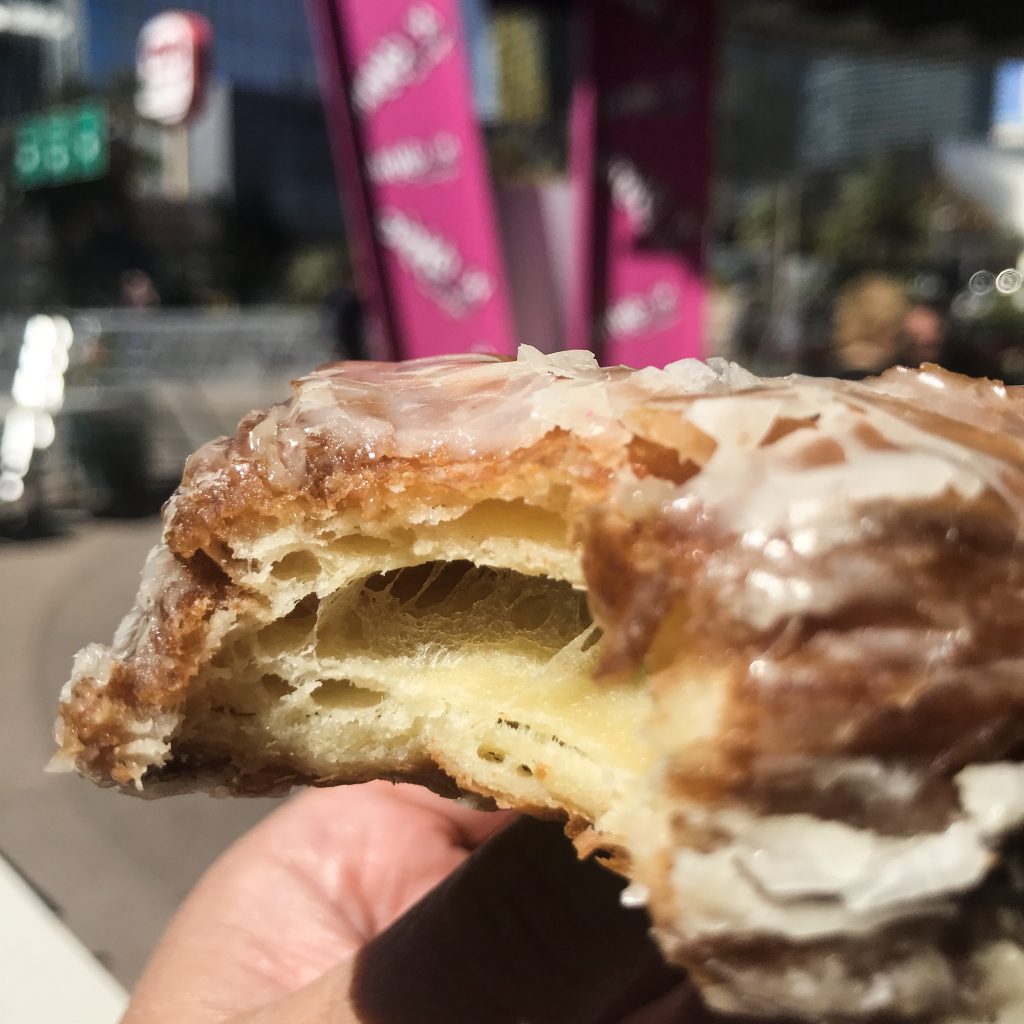 Eggslut was a place I kept seeing on Instagram so I immediately put it on my list to try. I’m so glad I did. Don’t be intimidated by the line. I left on the first attempt because of the line but stayed he second attempt and it only took me 15 minutes when I thought it would take 5x as long. 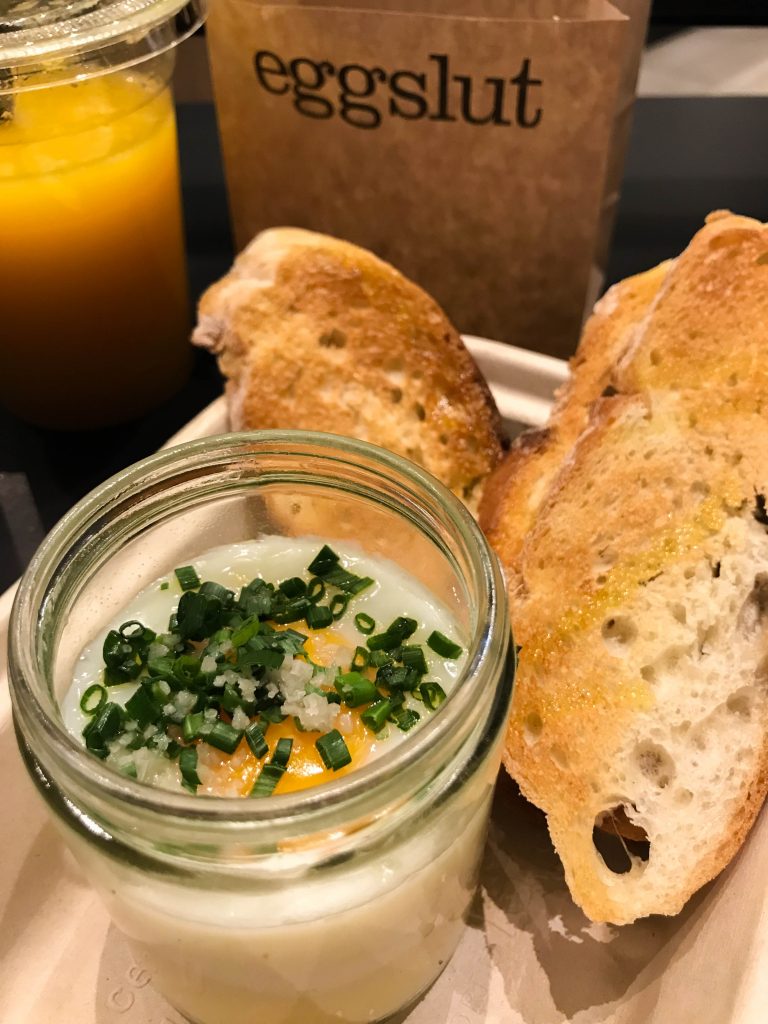 I got the bacon and egg sandwich and the slut. While the sandwich was good, I don’t care for ketchup on my egg sandwiches. It was either ketchup or some sort of sauce. But once I took a bite of the slut, which is basically creamy mashed potatoes with a poached egg, I knew why I had gone there to begin with. (Imagine heart eyes popping out of my head.) And I recreated it here too.

Anytime I see a place serving up chicken and waffles, I will try it. If you follow me at all on Instagram you would know that. {cough cough} 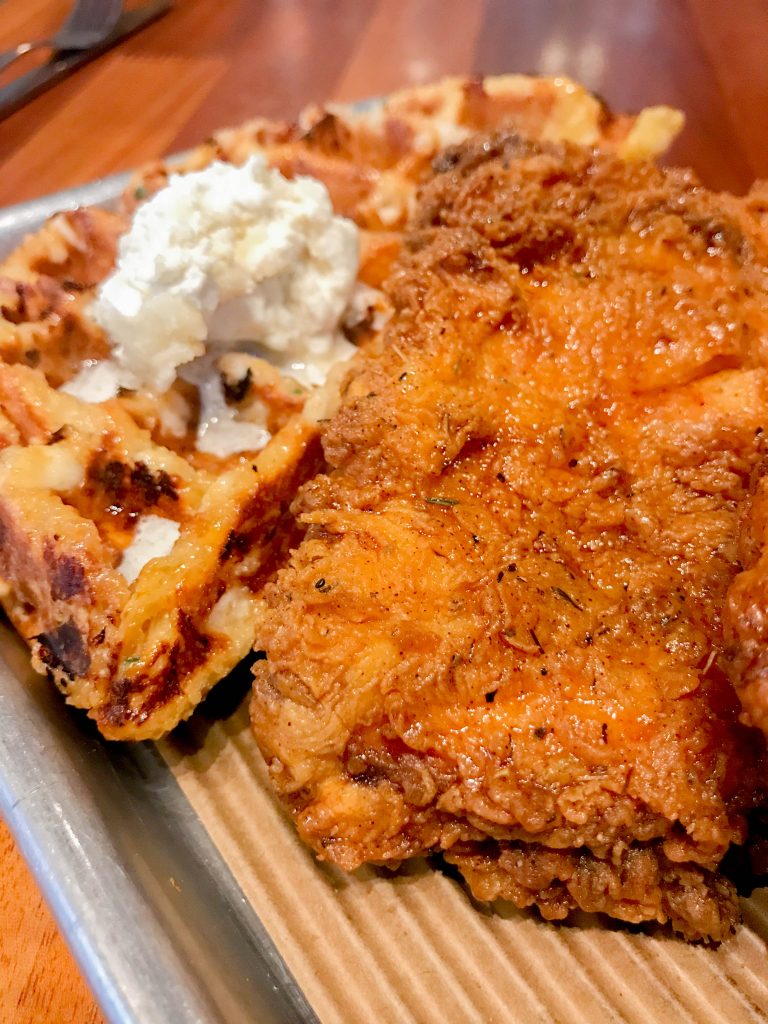 Bruxie’s is basically a fast food place serving chicken and waffles. It was tasty, sweet, delicious and hit the spot before my concert.

One of my coworkers and I went to Hash House A Go Go and we both enjoyed our dinners. I had the roast chicken and I was not disappointed. My coworker had a burger and she said it was the best one she’s ever had. And that’s saying a lot because homegirl always orders burgers. 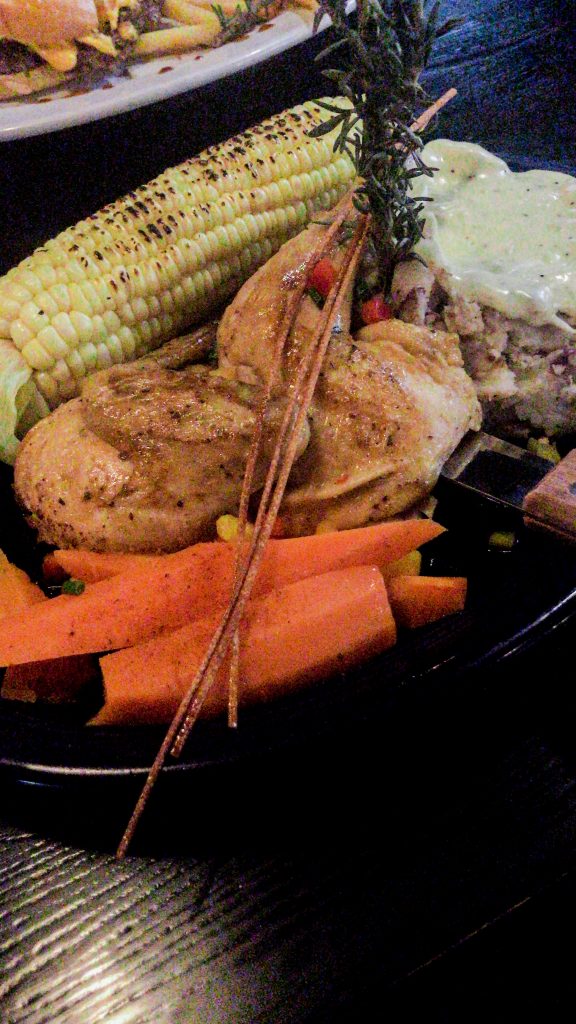 As a group, my coworkers and I hit up Grand Luxe Cafe. A few of my coworkers went the night before and were happy to go back again. They were all gaga over the salmon cooked three ways. I got a steak and Brussel Sprouts because, duh. Do you even know me? I love the sprouts! 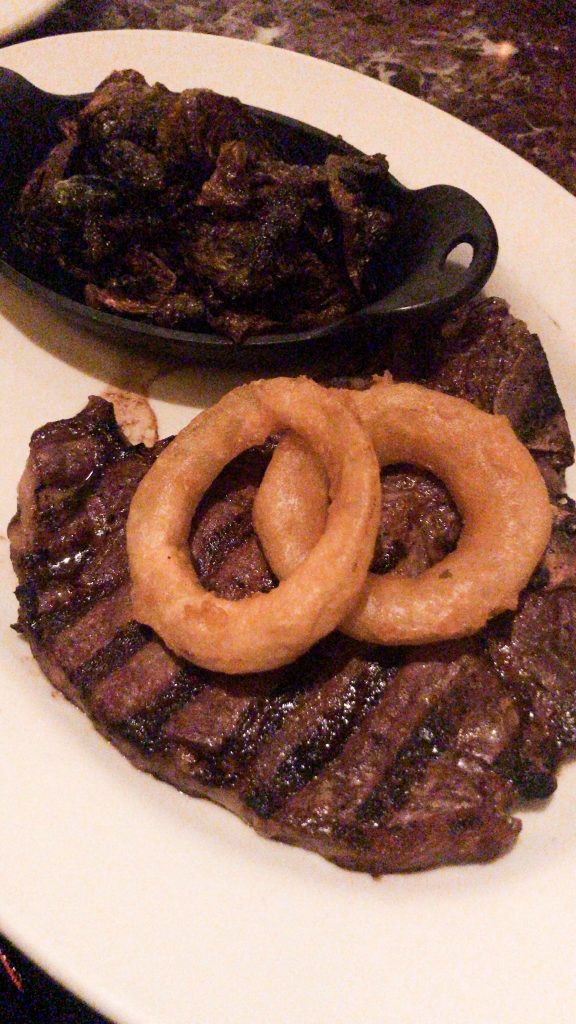 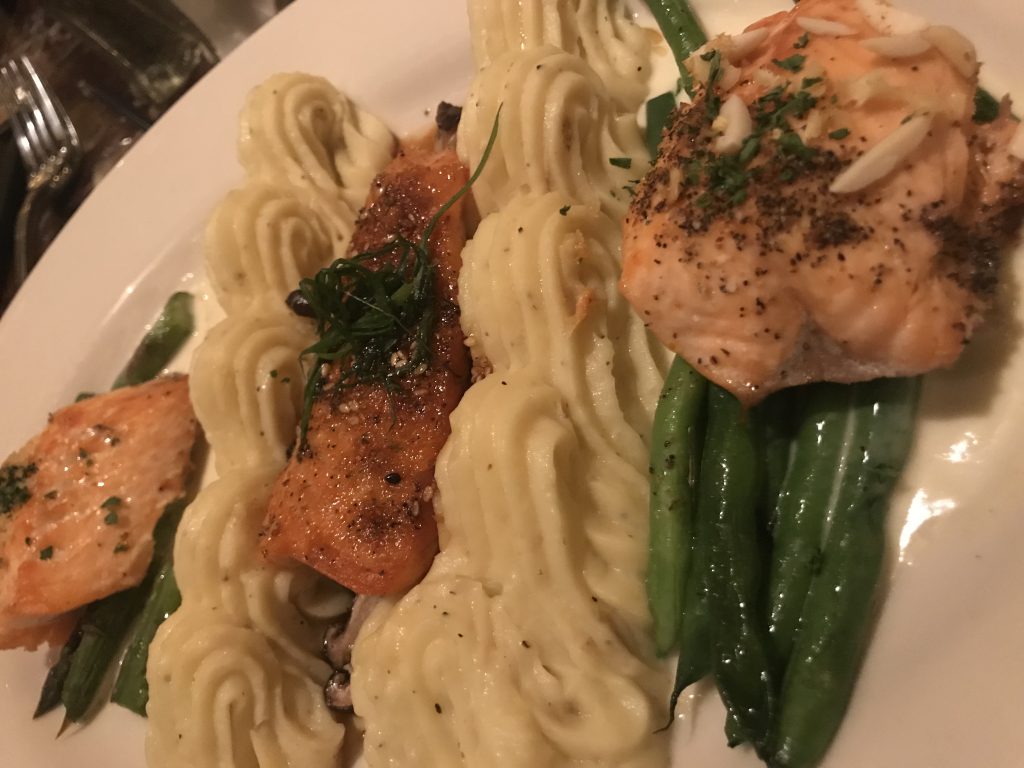 While the steak was good, the star was the Brussel Sprouts by far. They were crispy just the way I love them and everything I wanted them to be. I seriously contemplated ordering a second dish of them.

That’s it for my food excursion. Can you tell I really loved the Venetian? That and the Bellagio were my favorite casinos that I was able to see. I can’t wait to go back to visit other ones.

Here are some photos from my walk around the strip. The only time I went off the strip was to take a tour of the Neon Museum, which I highly recommend taking. And The Fremont Experience, which I don’t recommend. It was just not my cup of tea. At all. 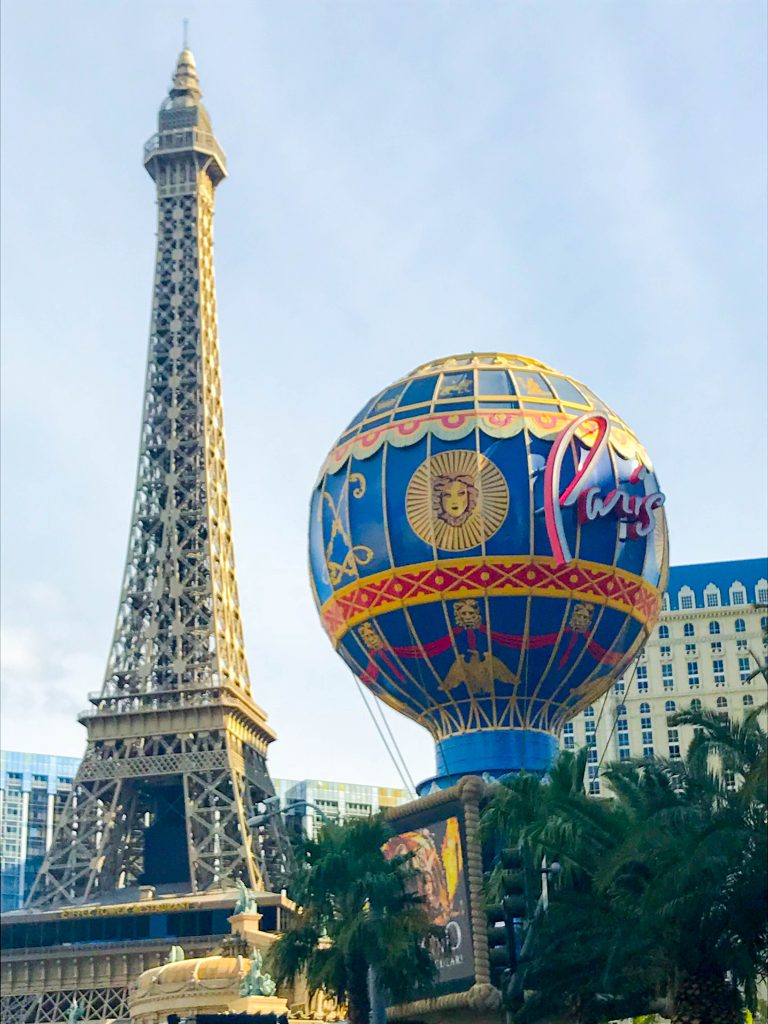 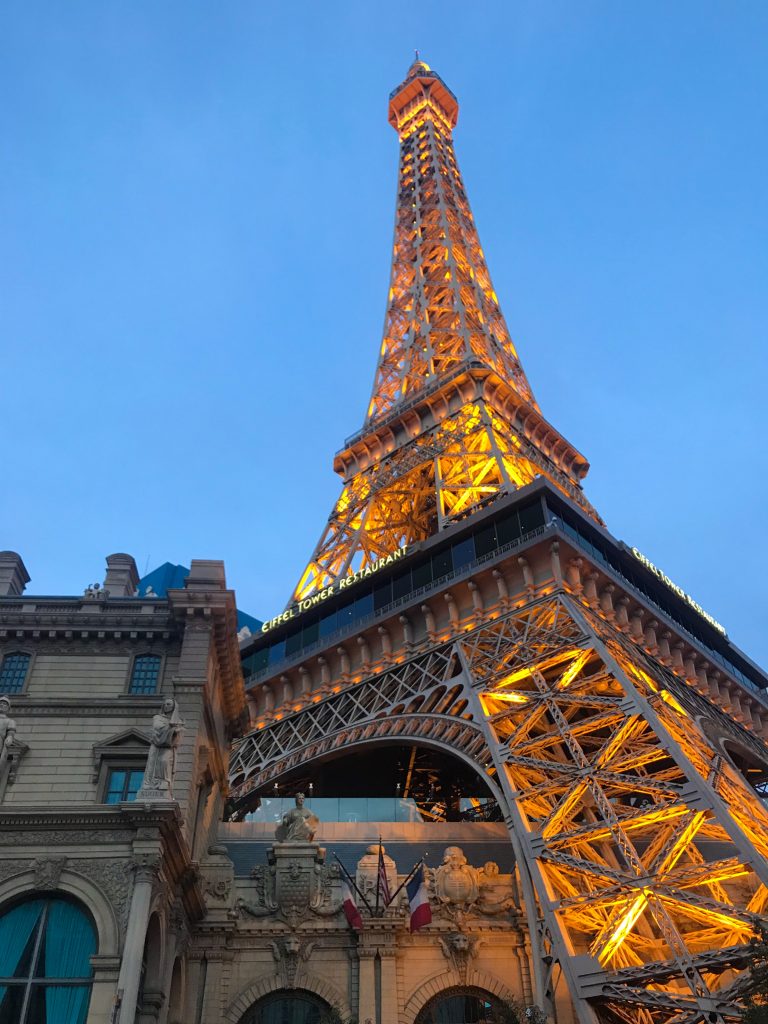 The Neon Museum was a great experience. You have to get your tickets in advance but it’s worth a trip off the strip. 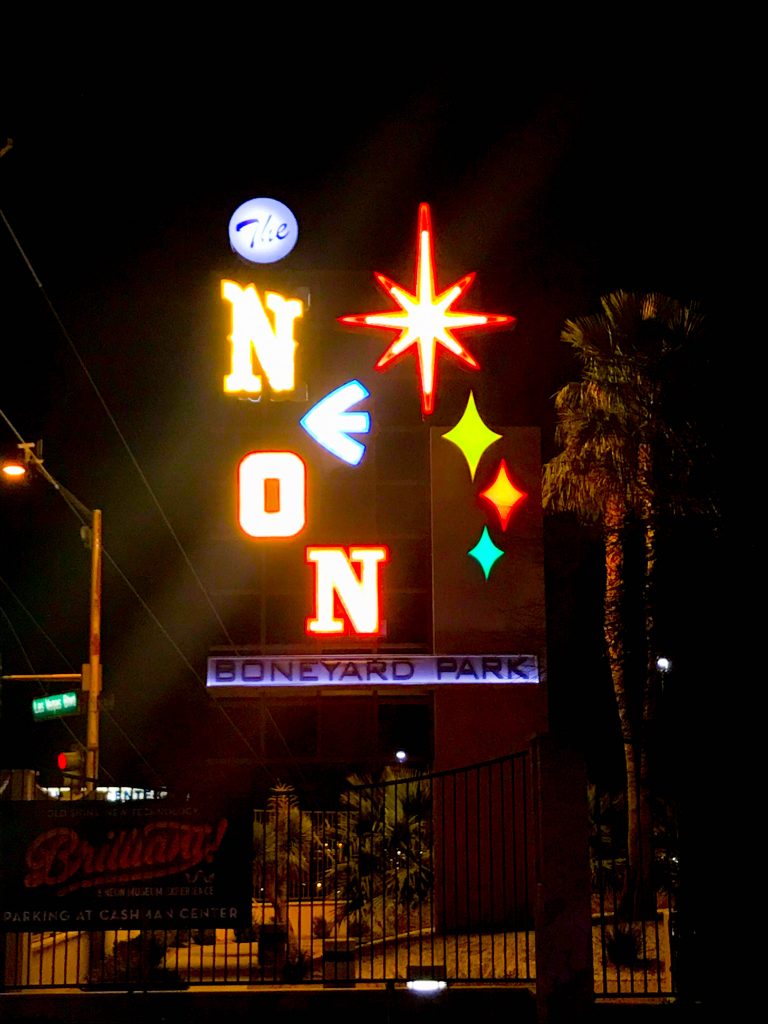 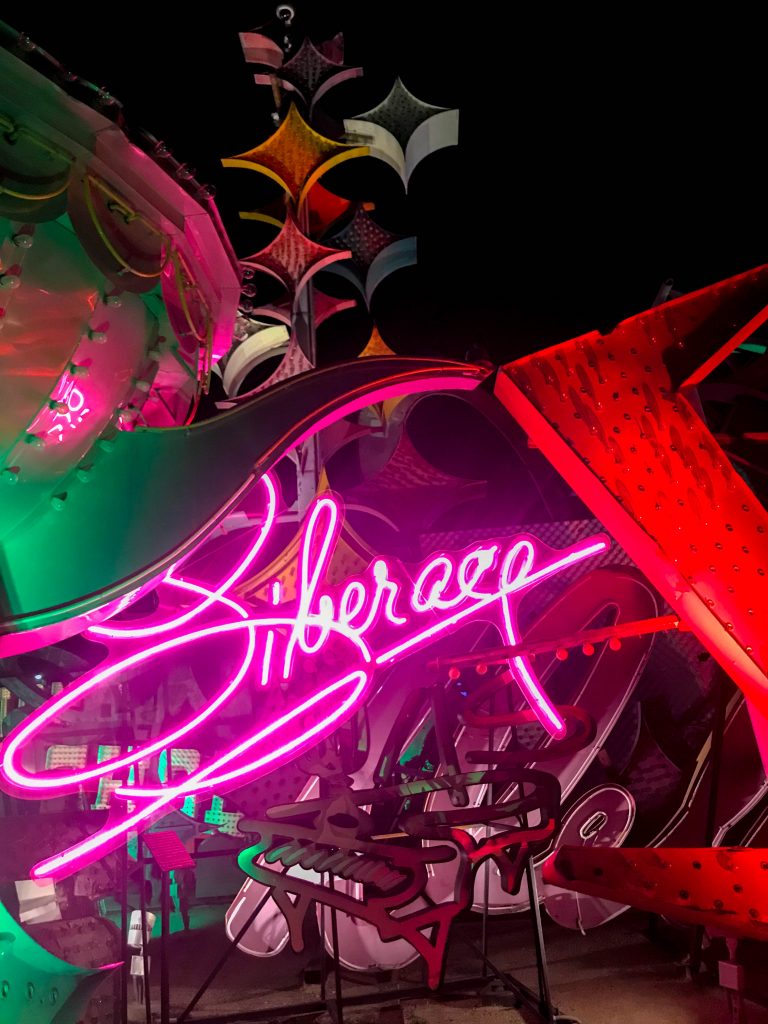 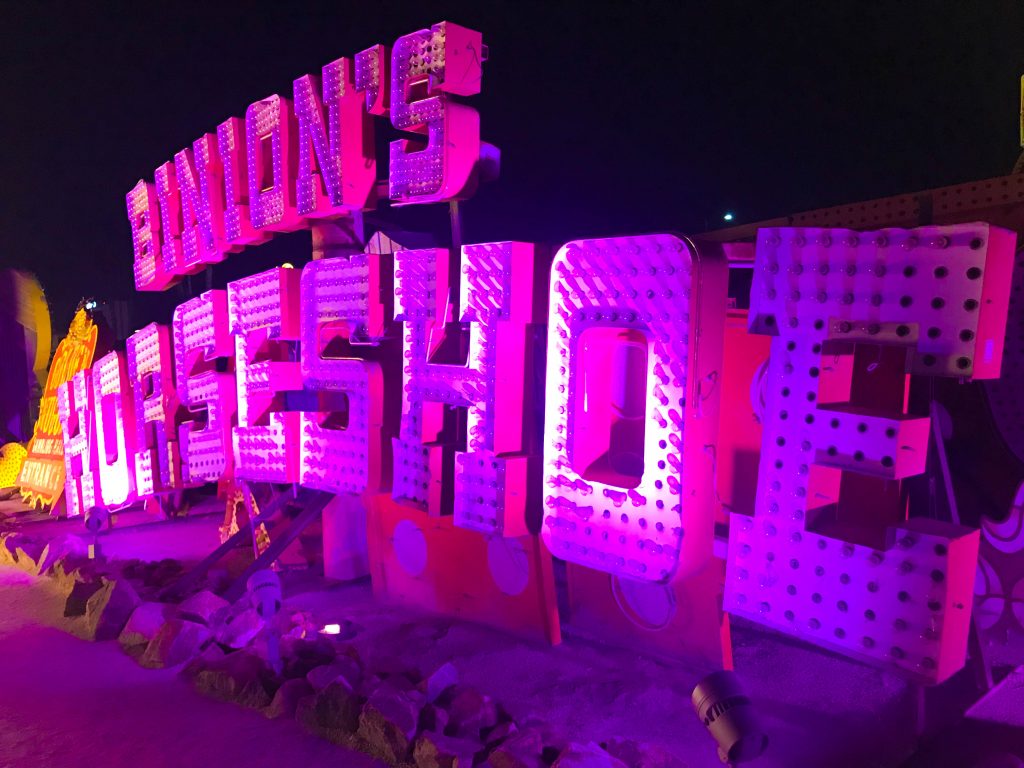 Beautiful flower installations at the Bellagio Casino and Hotel. 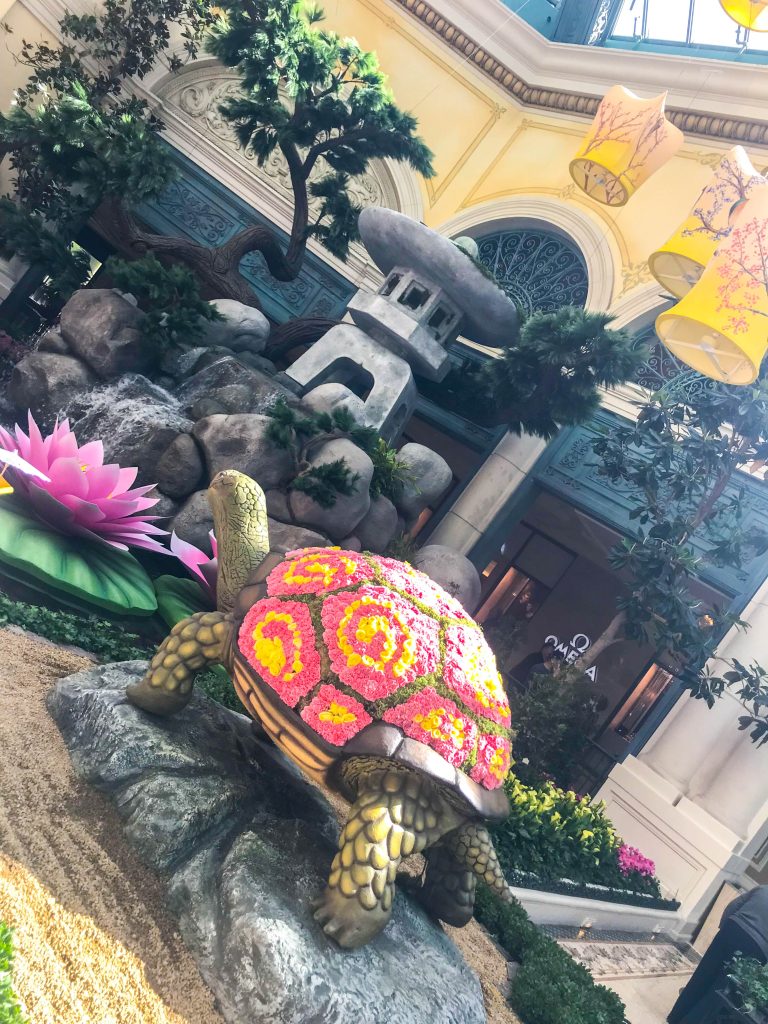 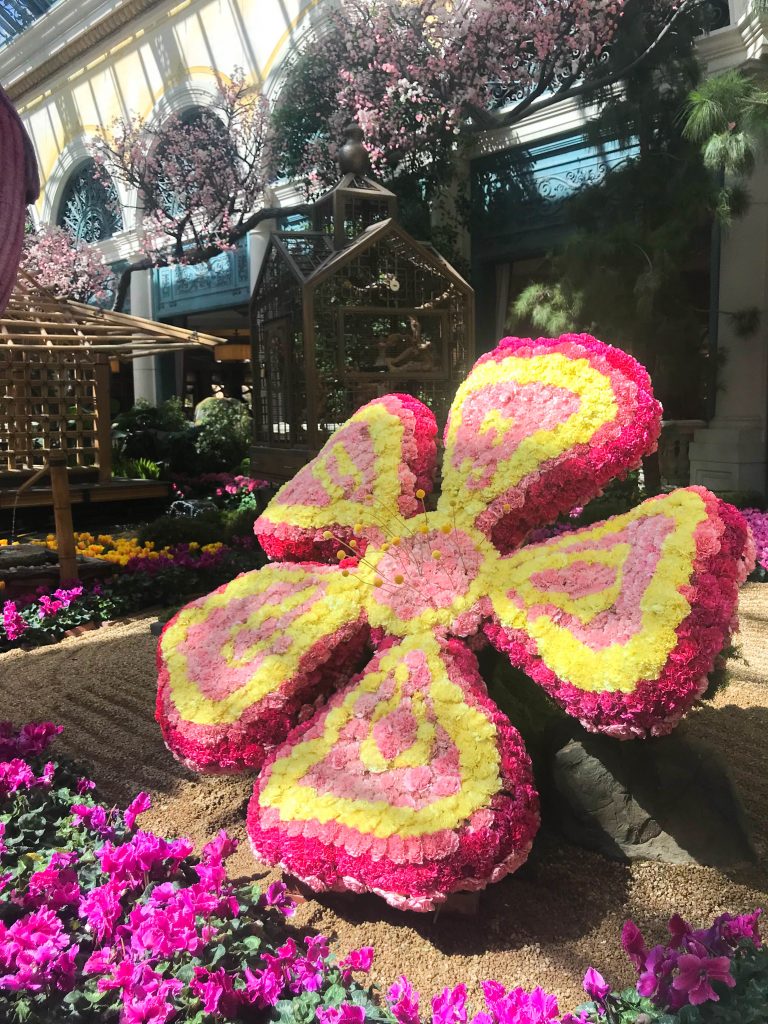 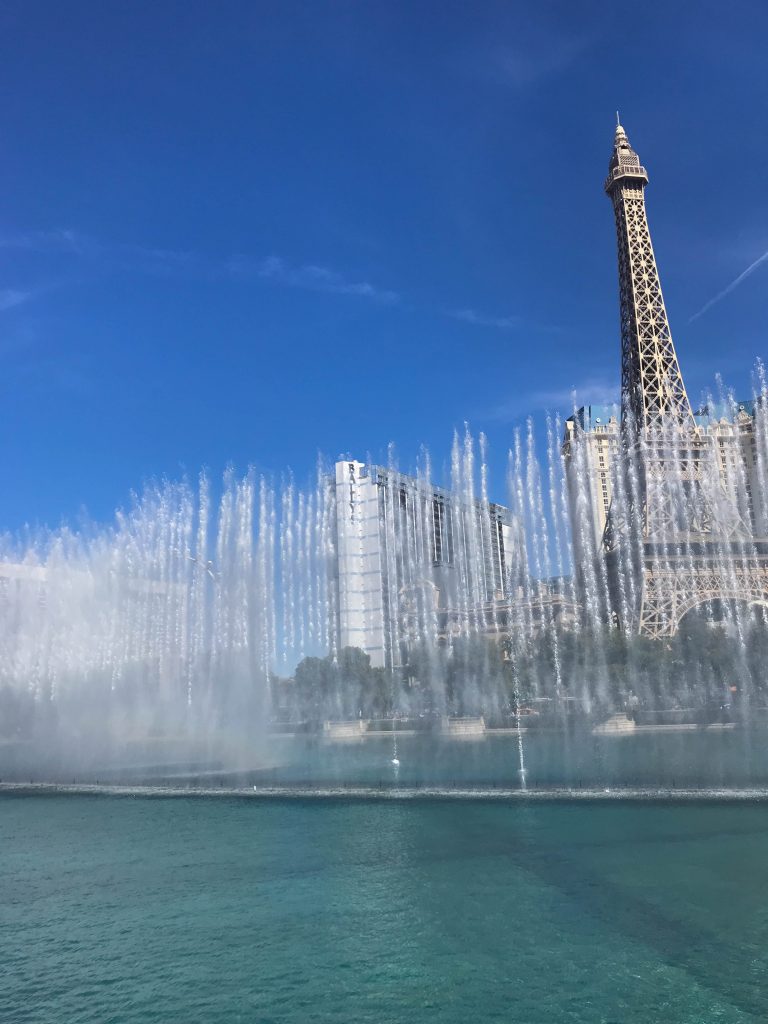 If it wasn’t pitch dark outside I probably would have thought this was really the sky – at Caesar’s Palace.

If you have a chance to see a show or concert while there, do it. I went to the Brooks and Dunn concert at Caesar’s Palace and loved it. They upgraded me to a better ticket and Brooks and Dunn did not disappoint! 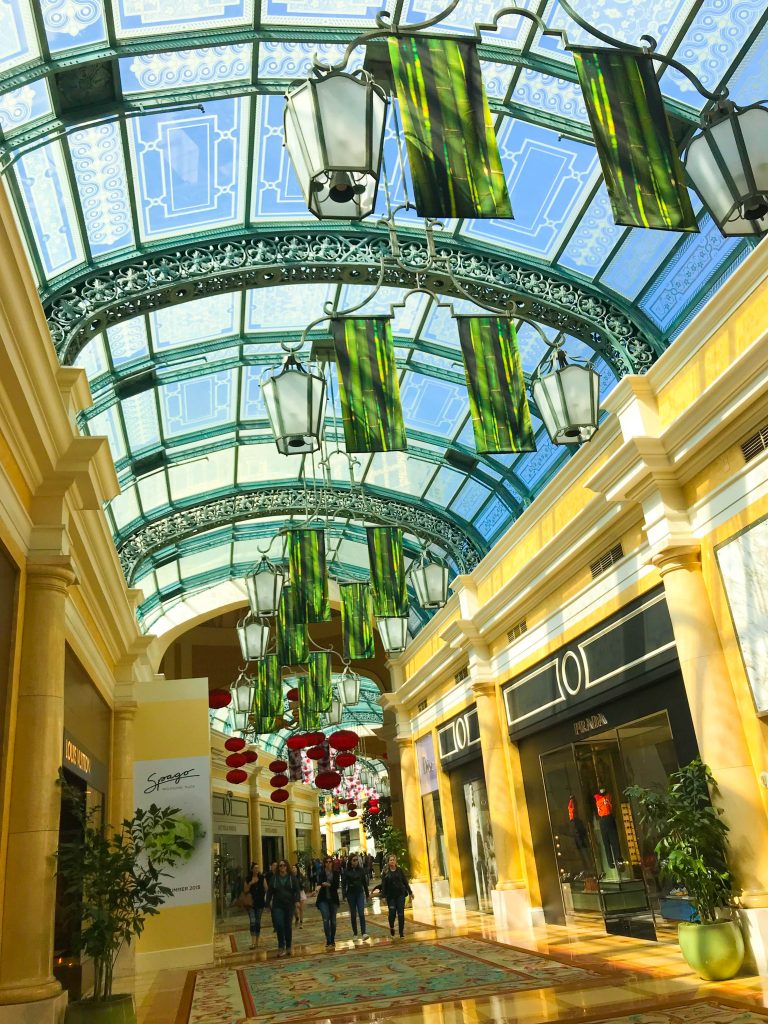 Ceiling at the Venetian. 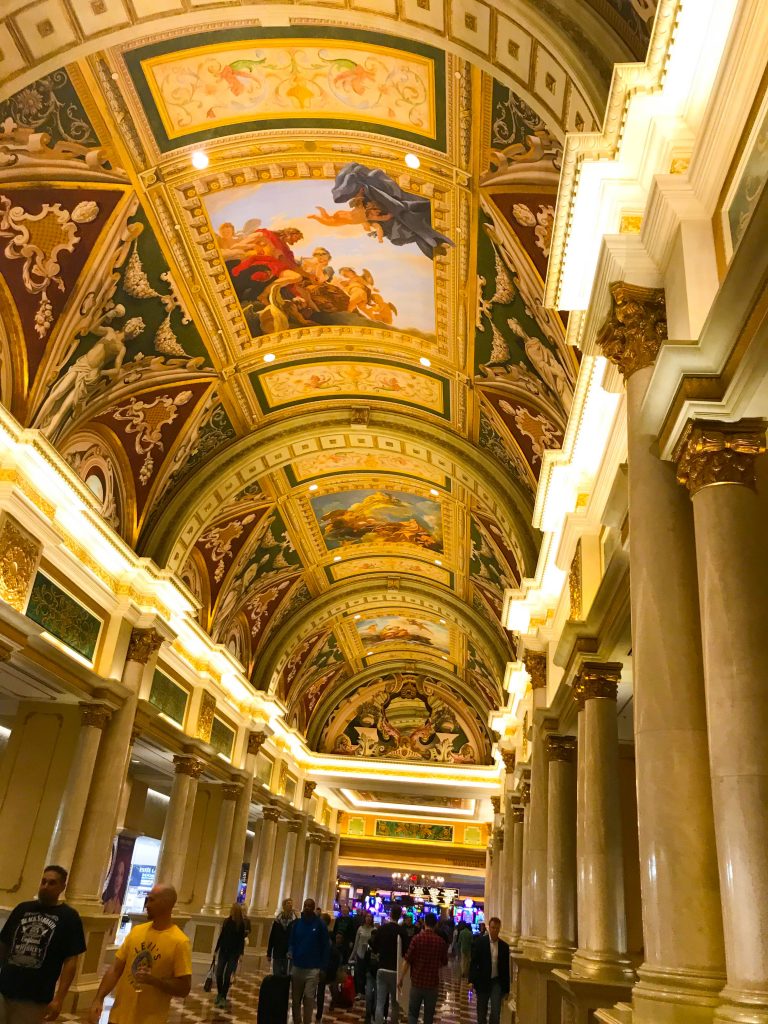 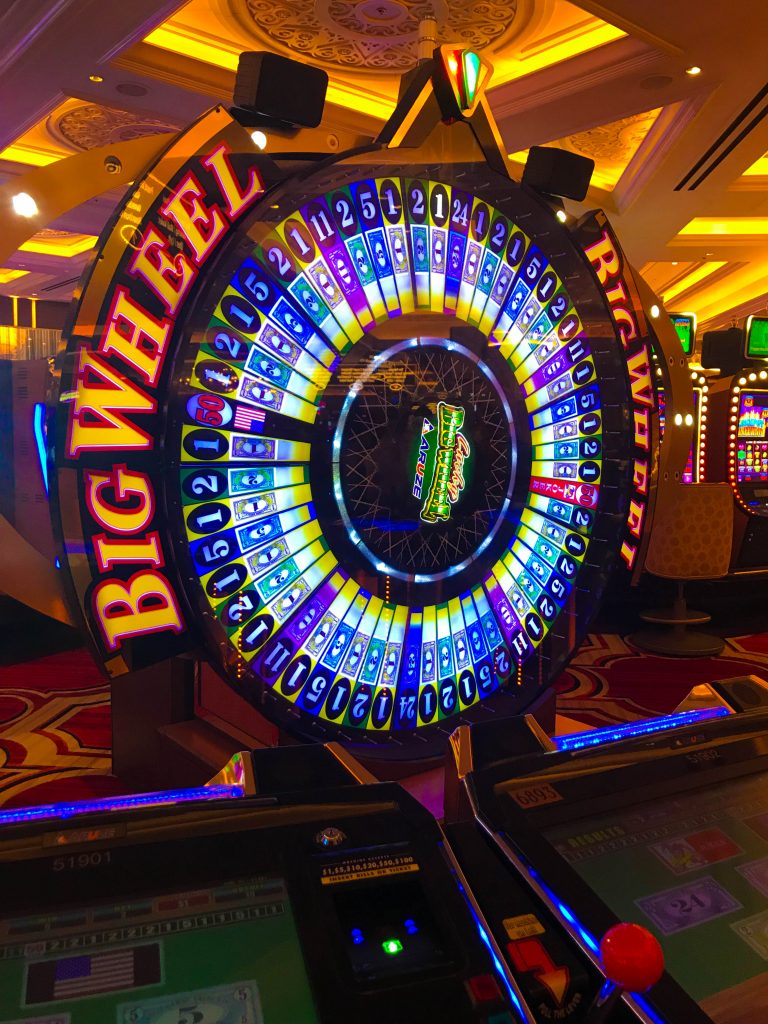 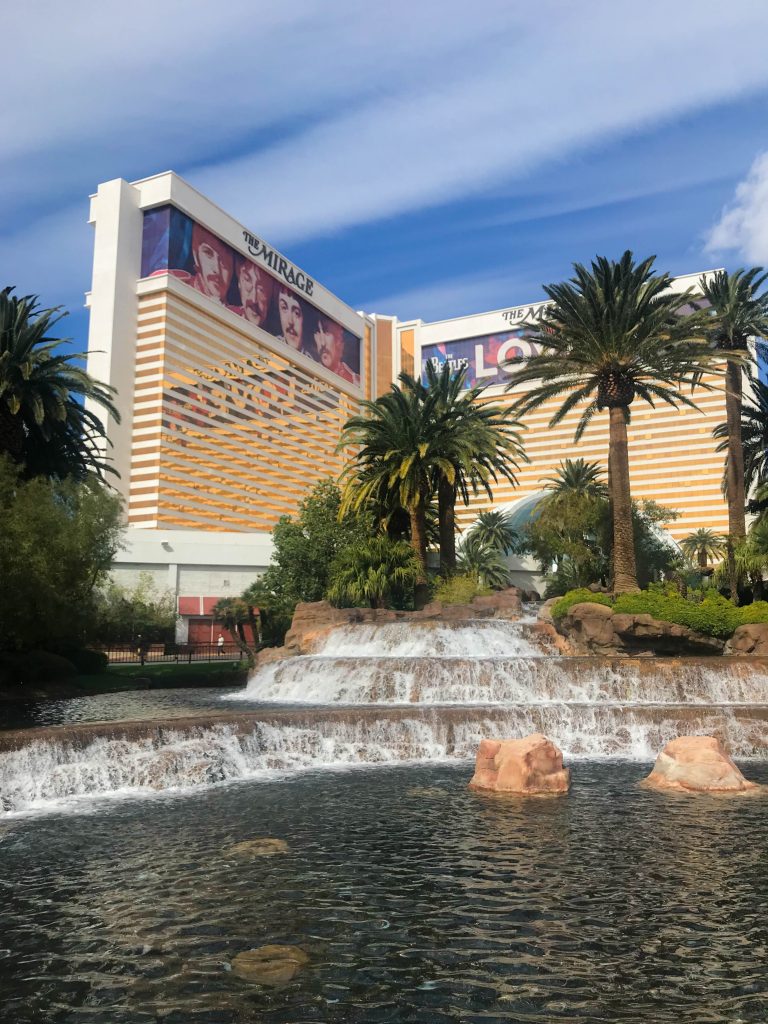 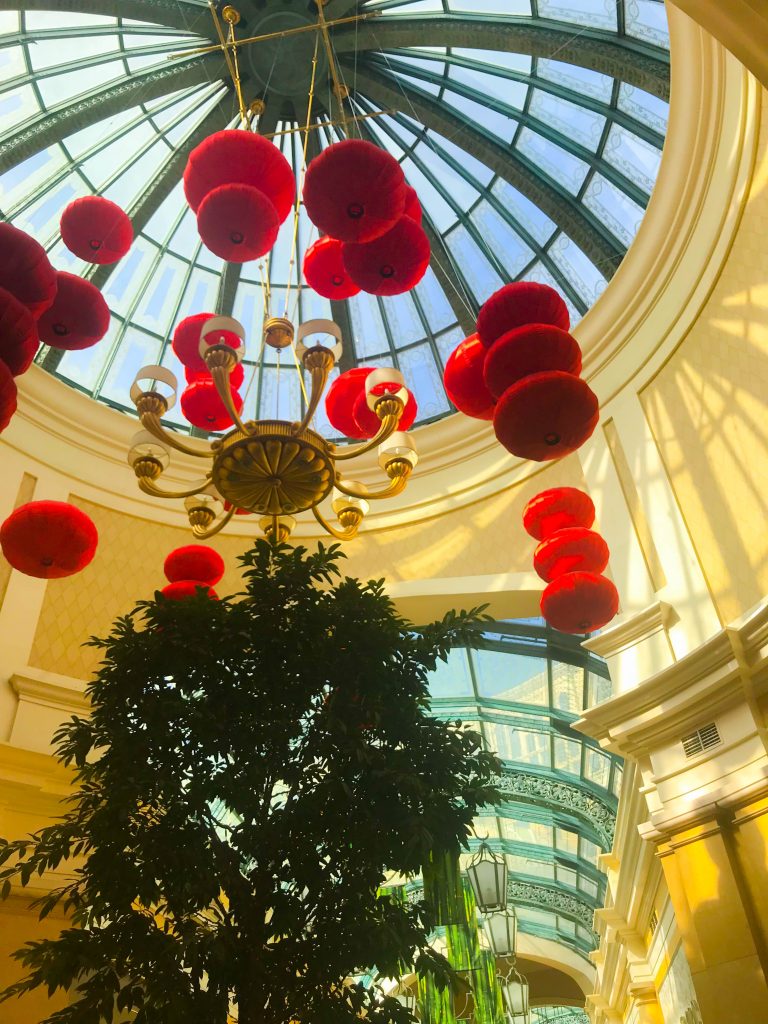 The last night in Vegas I was able to attend a private reception at the Siegfried & Roy’s Secret Garden and Dolphin Habitat. It was so beautiful to see. 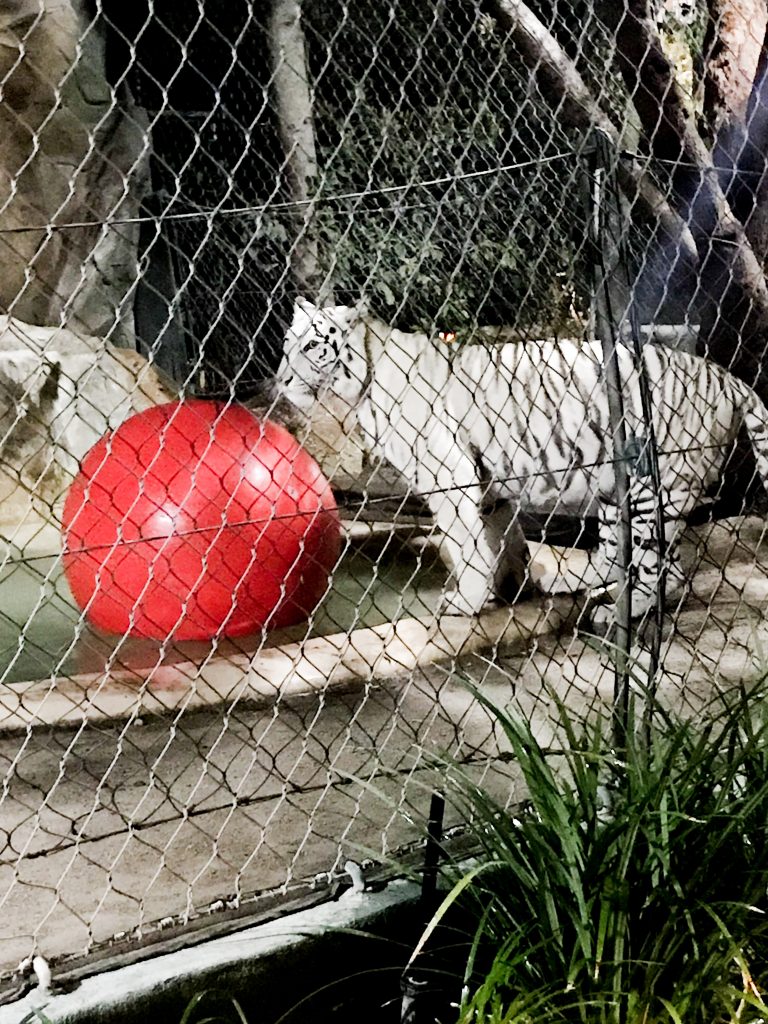 If you’ve never been to Las Vegas, be prepared to do a LOT of walking. The blocks are long and from one end of the strip (where I stayed the first few nights) to the other end is a long way. You can get around via Lyft or the bus which offers a set day pass. 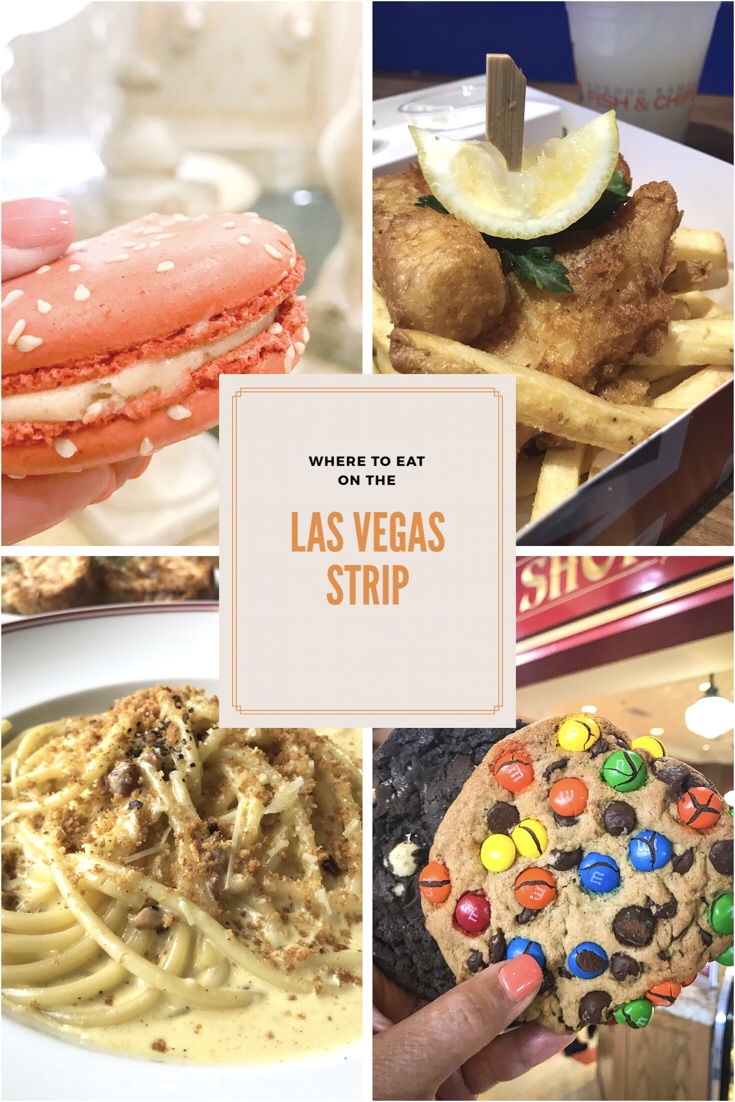