Now you can enjoy the flavors of an egg roll in a bowl without any of the fried calories. Topped with an egg this makes a hearty dish and is Weight Watchers friendly.

Did you know that I was 21 before I ever had Chinese food. And I’ve never had an Egg Roll. But this Egg Roll in a Bowl is on my weekly menu now. 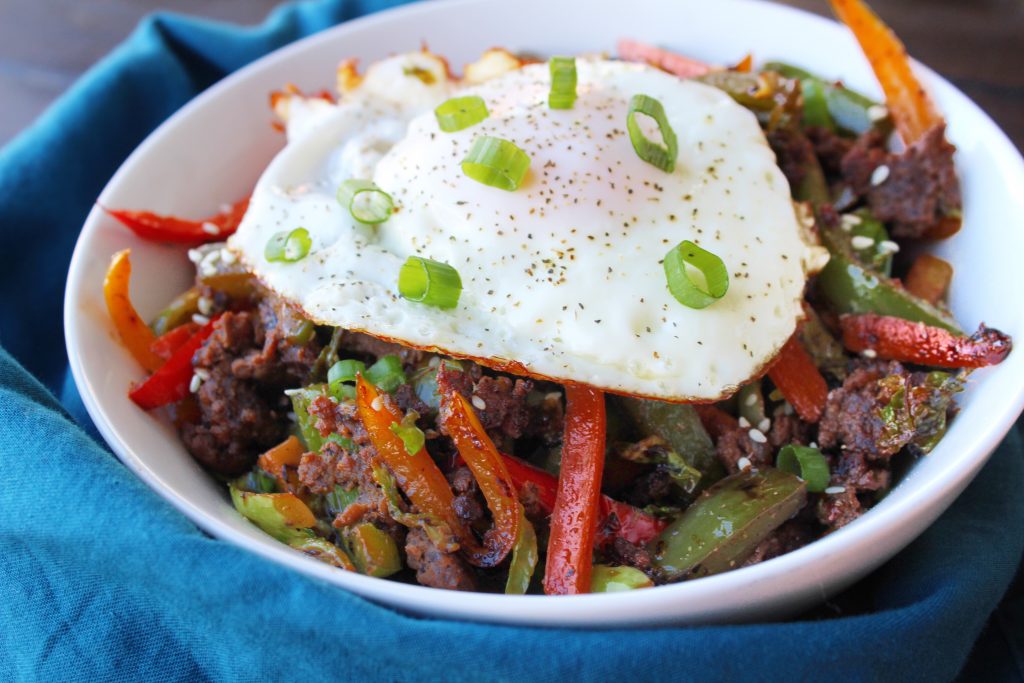 I don’t know why I never tried Chinese food but it was a boss who forced me to try it. We were going out to lunch for my 21st birthday and he said we were going for Chinese food. Being the easy going person I am I said I don’t like Chinese but ok I’ll go. He asked if I’d ever had it and I had to admit I hadn’t. He asked me to trust him to order me something I would enjoy.

Thus began my love for anything sweet and sour. And it wasn’t until later that I even tried Crab Rangoons. I could live off of those things now.

So the moral of that story is that I need to start trying foods before I say I don’t like them. Which, um, brings me to egg rolls. I’ve never had an egg roll but something about them makes me not want to eat them.

But when I saw Jessica on Instagram sharing the making of Egg Roll in a Bowl I was intrigued. First because she was using ground beef frozen right into the frying pan. I knew I had to try this method. I am that person who is always forgetting to thaw my meat or leaving it out too long and then I throw it away for fear of getting sick. This method of hers works perfectly. She takes ground beef and puts it in a freezer bag then flattens it. The beef is frozen flat so it thaws fast while heating up in the frying pan.

In lieu of slaw mixture like Jessica uses, I cut up my favorite cabbage, Brussels sprouts and added bell peppers and carrots. With the addition of the egg on top, this is a favorite at my place. Seriously. Plus the only points come from the egg and beef so it’s a low Weight Watchers points meal.

You came make it with bagged slaw mix or you can use your favorite vegetables to make it your own. Go easy on the salt when you season the meat as the soy sauce makes it a little salty. And if you don’t have this meat chopper (well, I have the Pampered Chef one but this is less expensive), I highly encourage you to get it. I use it for so much.

Egg Roll in a Bowl

Brown ground beef in a non-stick skillet. Season with salt, pepper and garlic powder. Once browned, remove beef from pan.

Add Brussels Sprouts, carrots and bell peppers. Cook for about 7-10 minutes until sauteed. Add beef back to the pan. Drizzle soy sauce, minced garlic and ground ginger.  Toss to combine. Let cook for about 3 minutes.