I have never had beignets before but this year they have been all over Twitter and blogs. I’ve had such a craving that I’m including a trip through New Orleans on our vacation this year so I can get some from the famous Cafe Du Monde.

When I was in High School, our band made the trip to New Orleans one year to participate in a Mardi Gras parade. I haven’t been back since so I’m looking forward to seeing the place again — since what I remember of that trip is null.

Well, I’ve never been accused of being patient so I had to try my hand at making some. For my first time making them, they were pretty good. they are actually very similar to Buñuelos only more ingredients and steps involved. 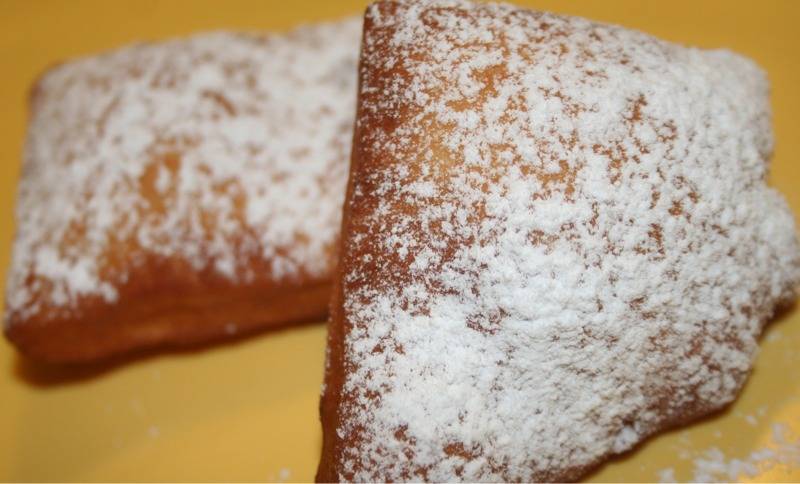 Microwave 1 cup water until hot (about 115°; Note: 20 seconds was too long) stir in shortening until melted. Add to yeast mixture. Beat at low speed, gradually adding 4 cups flour, until smooth. Gradually add remaining flour, beating until a sticky dough forms. NOTE: until a sticky dough forms – do not keep adding flour to make it not-sticky. (Not that I tried doing that or anything.)

Lightly grease a bowl with olive oil. Place dough in greased bowl then turn the dough so the top is greased. Cover and chill 4 to 24 hours. (Note: Dough will last one week covered in refrigerator)

Pour vegetable oil in a Dutch oven to a depth of 2 to 3 inches. Heat oil to 360°. Fry dough, in batches until golden brown. (Does not take long and will brown very quickly.) Drain on a wire rack.

Linked up at Sweets for a Saturday