You may have seen in a previous post that my niece graduated high school. A friend of hers invited her on a graduation cruise with her family so my sister and I decided to tag along and celebrate our birthdays on the open seas this year. This was my first cruise ever so my sister thought the Grand Classica Cruise would be good for me to get my sea legs. I bring to you my Grand Classica Cruise Review. 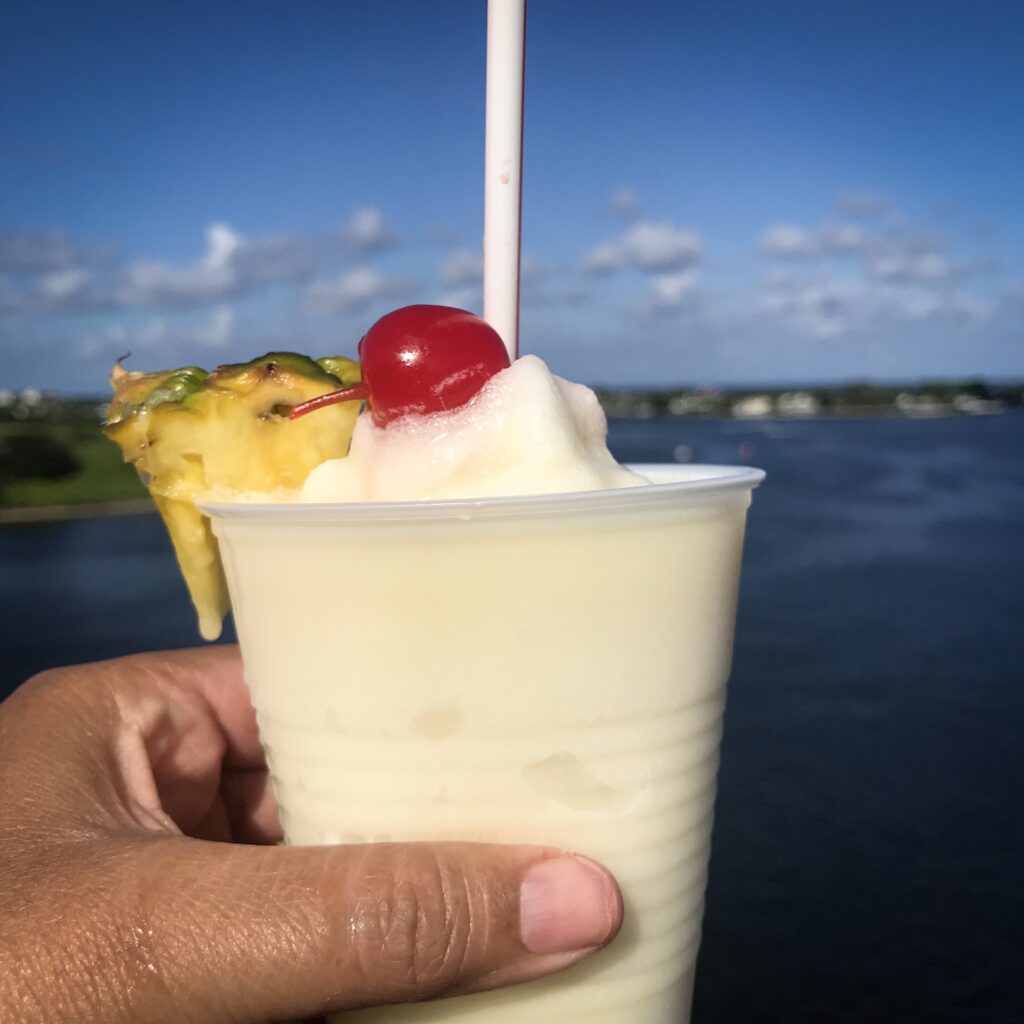 The Grand Classica is part of Bahamas Paradise Cruise Line. Let’s be honest here, this is a baby cruise in the size of the ship and the length of time of the cruise. 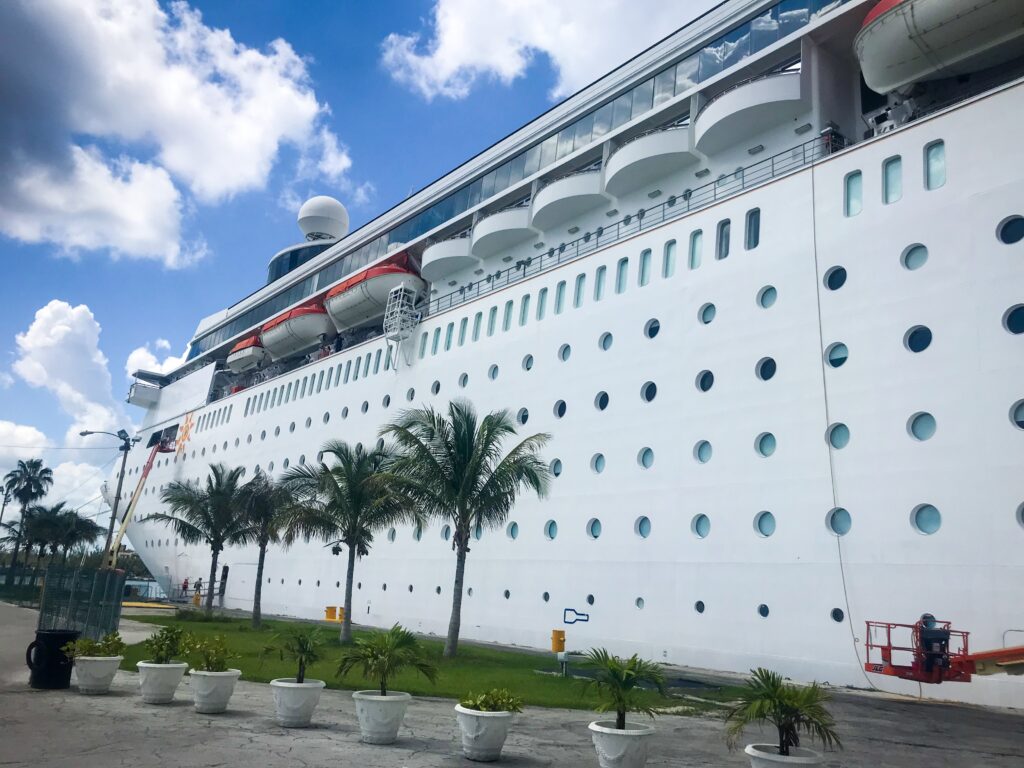 Cruises depart from West Palm Beach, Florida daily (they have two cruise ships that alternate). The ship departs at 5:30 pm, you spend the next day in Freeport in the Bahamas, then come back to Florida and arrive the following morning. So two nights on the ship.

I told my sister early on this year that I wanted to go on a cruise for my birthday but I never planned anything so this was perfect. I’m a little iffy being on a large body of water (Hello Titanic) so I wasn’t sure how I would feel on the cruise. Having never been on a cruise before, I am so grateful I was able to try this smaller cruise out to make sure I wouldn’t get sick on it or feel claustrophobic.

I didn’t feel the ship moving at all and enjoyed every minute on the cruise. The staff were helpful and nice answering all our questions. We didn’t have any problems with our room and I must say I slept very soundly both nights. The ship had super comfortable beds. The rooms are small but you are really only there to sleep so it had what I needed.

There is a multi level deck that has pools and a hot tub on opposite ends of the ship. One side has music and is for everyone. The other side is for adults only and is quieter. The pools are small (as in super tiny) but there are a lot of chaise lounges around the deck. They provide the towels for you and also have showers on deck. I wanted a little bucket of water or a spray bottle to spritz myself with water since I didn’t get in the pool. It was so dang nice out there!

We really didn’t get a chance to see/take advantage of everything the ship had to offer. We did go to the entertainment in the theatre the first night and enjoyed the singing and dancing. The second night we saw a funny comedian and when they say for adults only, they really mean it.

We stopped by the casino for a bit and gave them some money. This is probably the only place where you can use cash on the boat. Everything else is through your key card that is activated through your credit card/cash when you are getting on the ship. It is also your room card and how you get off/on the ship.

They have a few more things to do but like I said we didn’t have a chance to see it all. That just means another trip! I do want to try out their other ship, the Grand Celebration.

Being a food blogger, I think I expect way too much of eateries. For this cruise, the cruise cost includes your choice of a buffet, sit down restaurant and a burger bar. There were other places that you could pay extra to dine but I steered clear of those because let’s be honest, I’m cheap.

While the food was fine, it wasn’t exceptional or anything to rave about. I understand it’s hard to cook for so many people and trying to make it enjoyable for everyone, but I just expected a bit more. I have friends who have gone on the bigger cruises and they all raved about the food so maybe it was too high of an expectation on my part.

The ship had quite a few excursions to choose and our group chose three different ones to try. My sister and I went to the beach at one of the resorts that was all-inclusive meaning it offered all you can eat and drink within the price. My niece and her friend chose the snorkeling excursion and the others chose the dolphin excursion. I would have loved to have done them all but I really wanted to spend the day at the beach.

The beach did not disappoint. A bus took us to the resort and from there we spent the day lounging and just relaxing in the water. The chairs were waiting for us and so was the water. I spent 90% of the time in the water until a rain shower sent us in about an hour before the bus was to pick us up.

The food and drinks weren’t anything special but I was grateful they were there close to our seats. If I’m being completely honest, the food/drinks portion was a disappointment. The drinks were watered down and it took a couple of hours before we could even get one. The food was meh and I’ll leave it at that. But, the water more than made up for this. I felt like I had been on a week-long vacation with my day in the water.

This trip was a gift from my sister so I am not sure of the price but the majority of the people on board seemed to have gotten a Groupon deal for two. If you do get that, be sure and read the fine print. I heard so many people complaining about the added costs of the cleaning fee and the ships normal fees. My sister was aware of these so it wasn’t a surprise to us.

I can totally see people doing this for a quick weekend trip if they can’t afford a full week for a cruise. Or if they don’t want to go on such a big cruise.

I really enjoyed the trip even with my expectations of the food. I wish we had known we could extend our time at the beach to a few days. I totally would have done that.

Now I’m ready for the next cruise!