If you follow me on Instagram then you know that late last month I was able to spend some time in New York City. The majority of the time was for a work training but the last couple of days were for pure fun. My sister joined me for the weekend and we played around the cold city all weekend long.

Knowing this trip was coming up, I was scoping out Instagram for all the best places to eat at for a while. This was my boss’s first trip to NYC so I didn’t want to disappoint him either.

In my previous job, I traveled to New York all the time but I never quite took advantage of all the amazing places to eat. Not one to let an opportunity pass me by, I dove in head first and tried to eat at every location on my list.

I used Google Maps to get around the city. Beforehand I created a map with all the places I wanted to try. This is definitely the way to go. While I didn’t make every place I had mapped out, I gave it my best. (Stay tuned for a blog post on my google map experience.)

Since the list was quite lengthy, I am splitting it into multiple posts. Get ready! Here are a few places, beginning with my top 3 first: 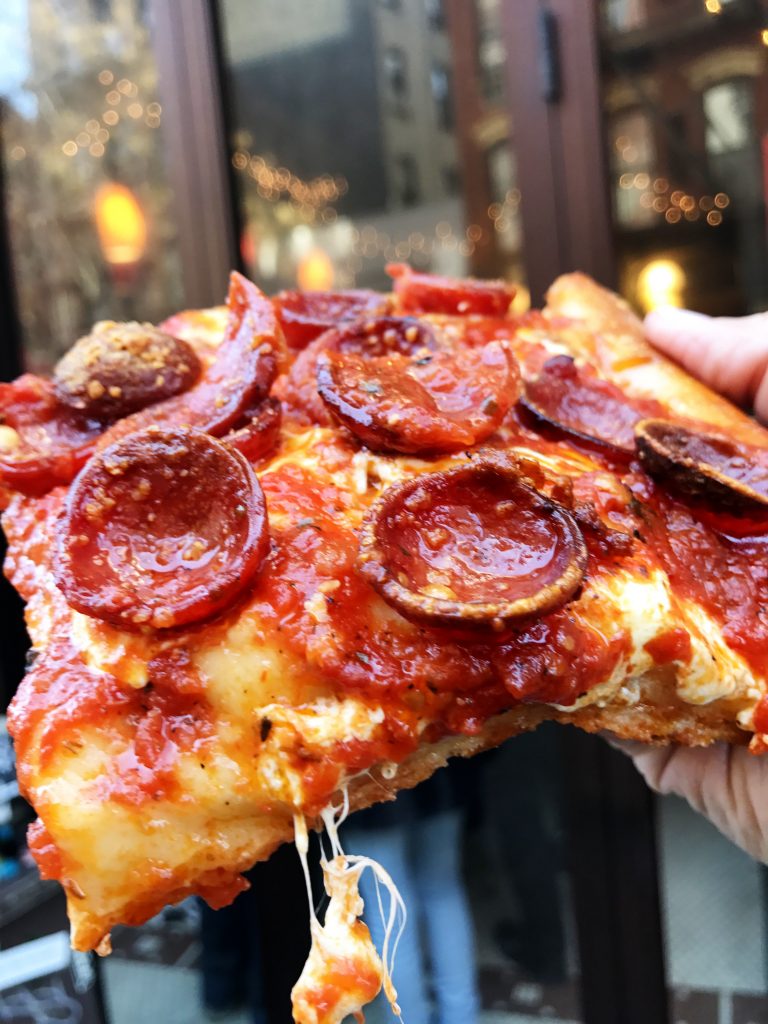 Oh. Em. Gee. Do you see that square pizza. No really, see that crunchy crust, grease dropping down my arm, well done pepperoni. That right there is perfection folks. This was the first place we went to as soon as we got in the city. Knowing my boss is a pizza fanatic I had to start there. This is a little hole in the wall where you stand in line only to get to the front to be given a number and told to wait in another line. Depending on what you order, you get it in the first line or wait to tell them how many pieces of this square pizza you want in the second line. The line moves quickly so don’t let that deter you. 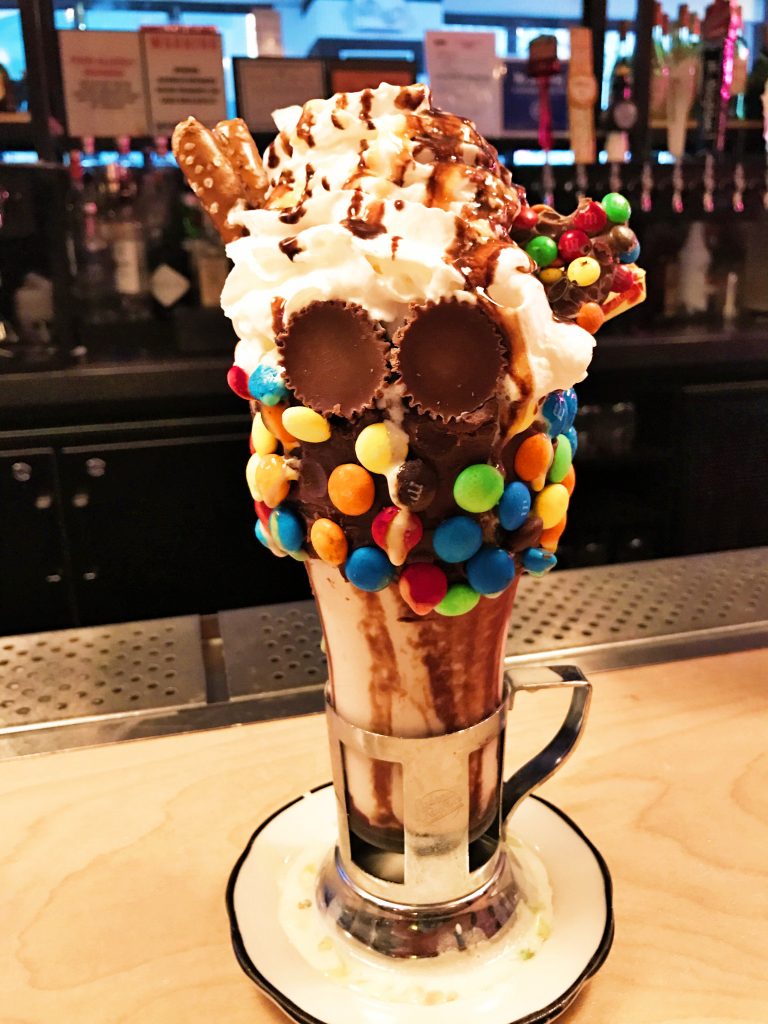 I’m usually not one for hype when it comes to standing in line for food. And luckily I got to Black Tap early enough between lunch and dinner that there wasn’t a line but having had one of their amazing over the top shakes, I’d probably wait in line for another one. This peanut butter concoction (Sweet and Salty Milkshake) was out of this world. 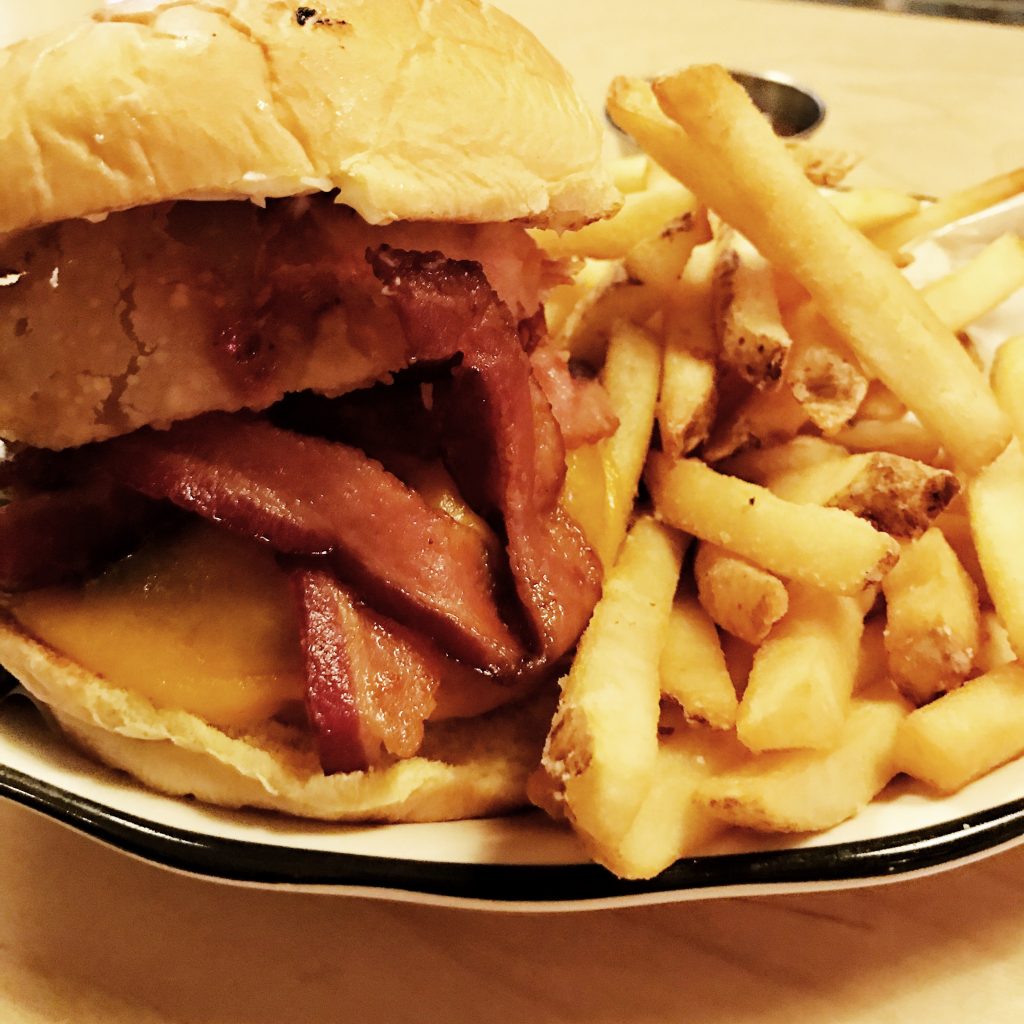 I asked the waitress to bring it to me first before my burger because I probably wouldn’t be able to eat it if I had my burger first. Best decision ever. I devoured the whole shake and took my burger for dinner later. 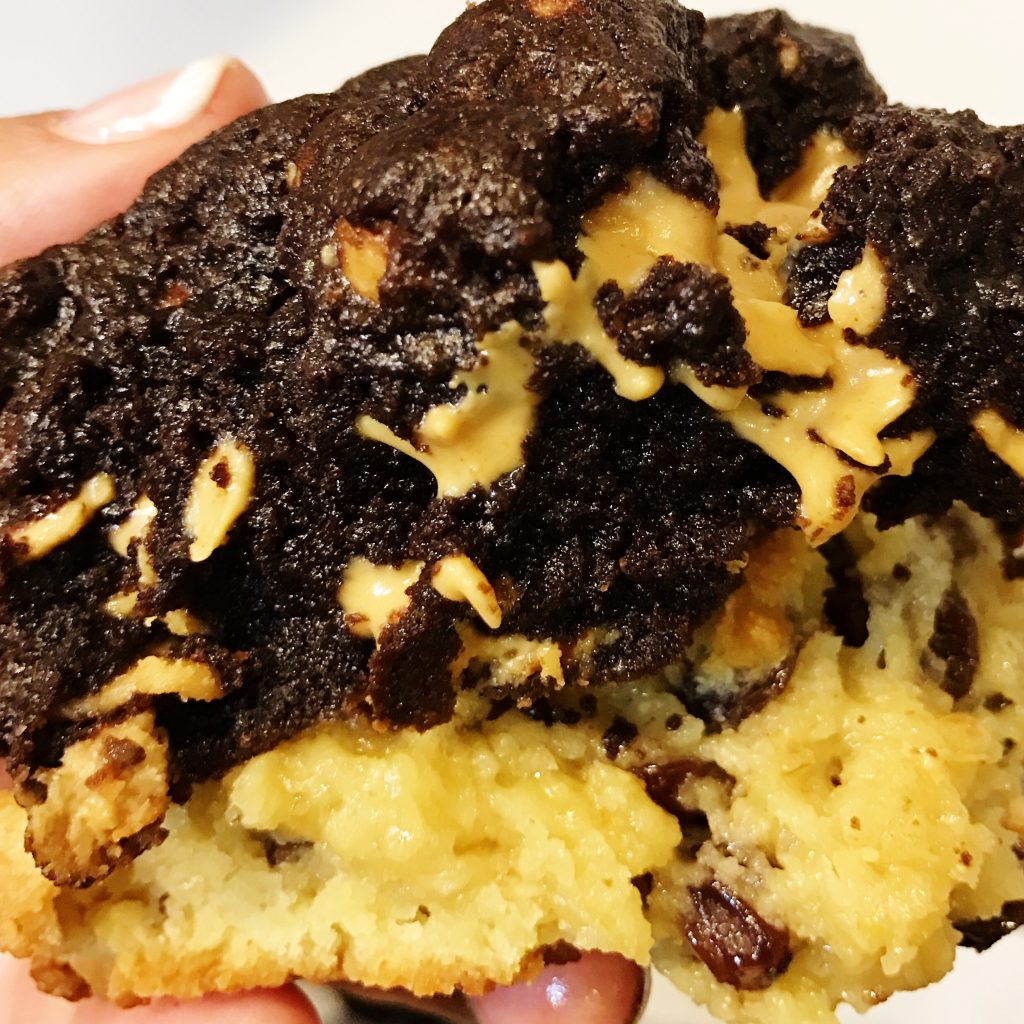 This is one place I saw so many bloggers visiting and I was a little leery of going because it just seemed so far away. Luckily it was a straight shot on the subway from Columbus Circle so I made the trek and I’m so glad I did. These cookies were so warm when they handed them to me that they literally fell apart as I was trying to get the money shot of them. By the time I was ready to leave and get back on the subway I had a bunch of crumbs in my bag but they were some of the best crumbs I’ve ever tried. I’ve seen a couple of copycat recipes so I’m definitely going to try one (or two). My boss was a huge fan and ate all my crumby leftovers. 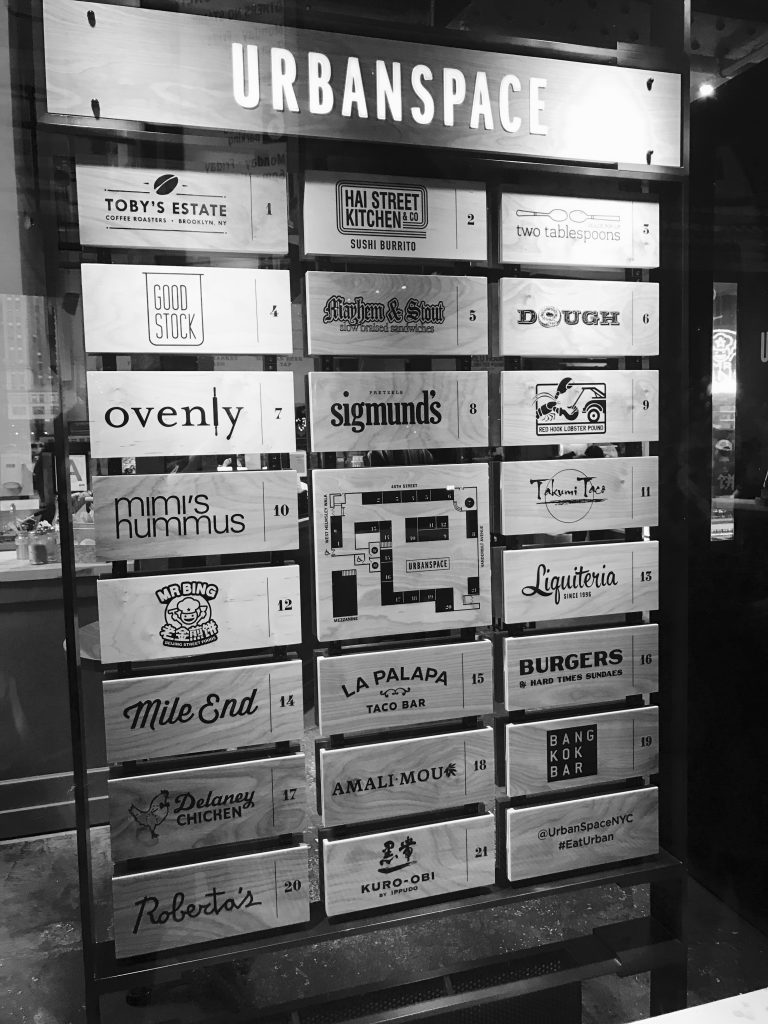 Urban space is close to Grand Central Station and is basically a food court with some amazing options for food. My sister and I tried four different places here that we had to be rolled out. 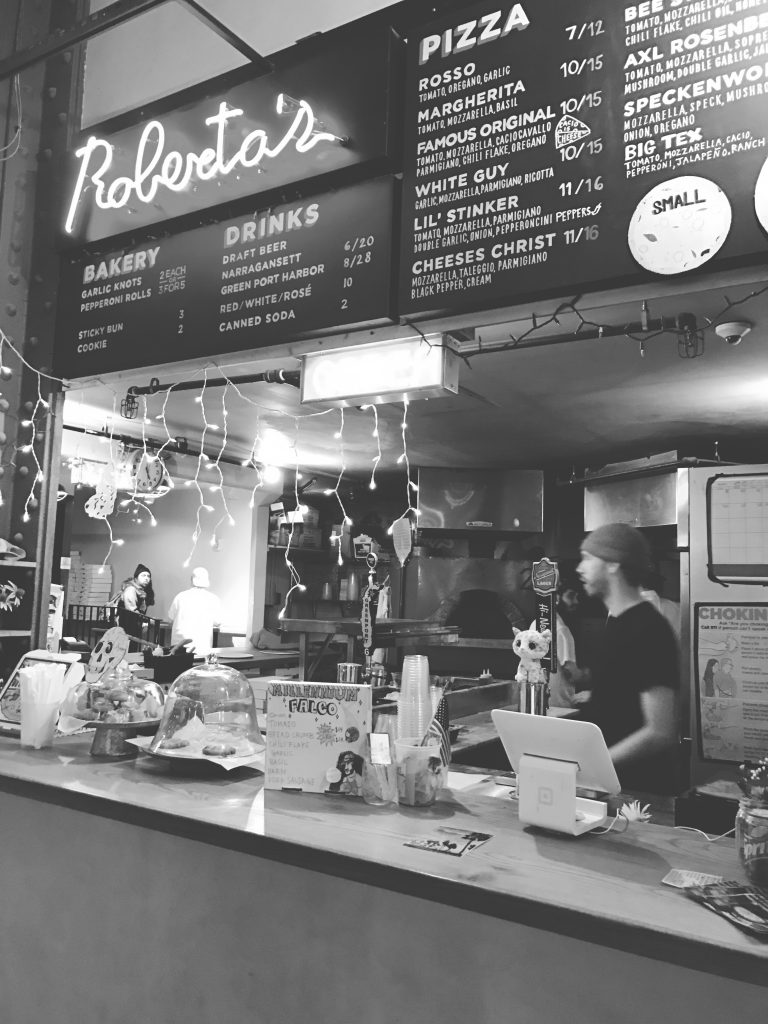 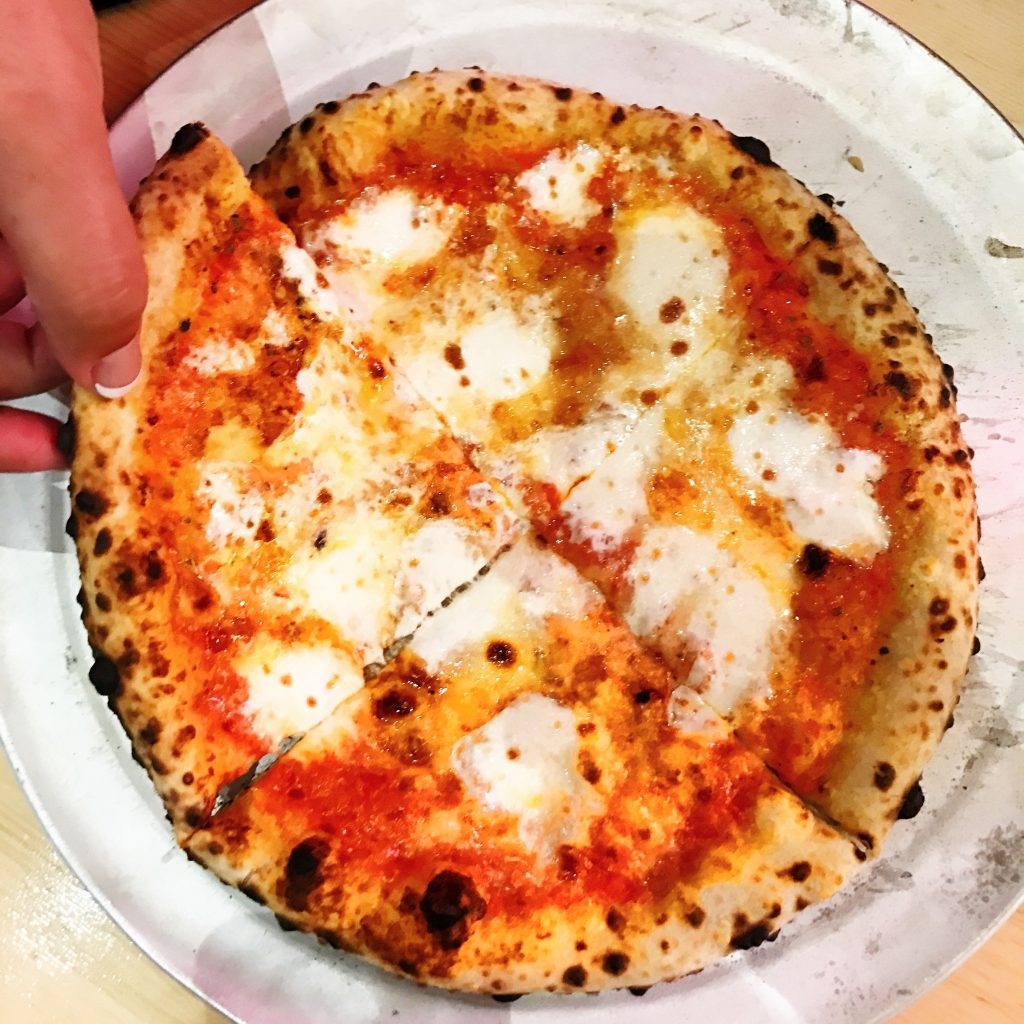 One of my fellow training attendees raved about this pizza so of course I had to try it. 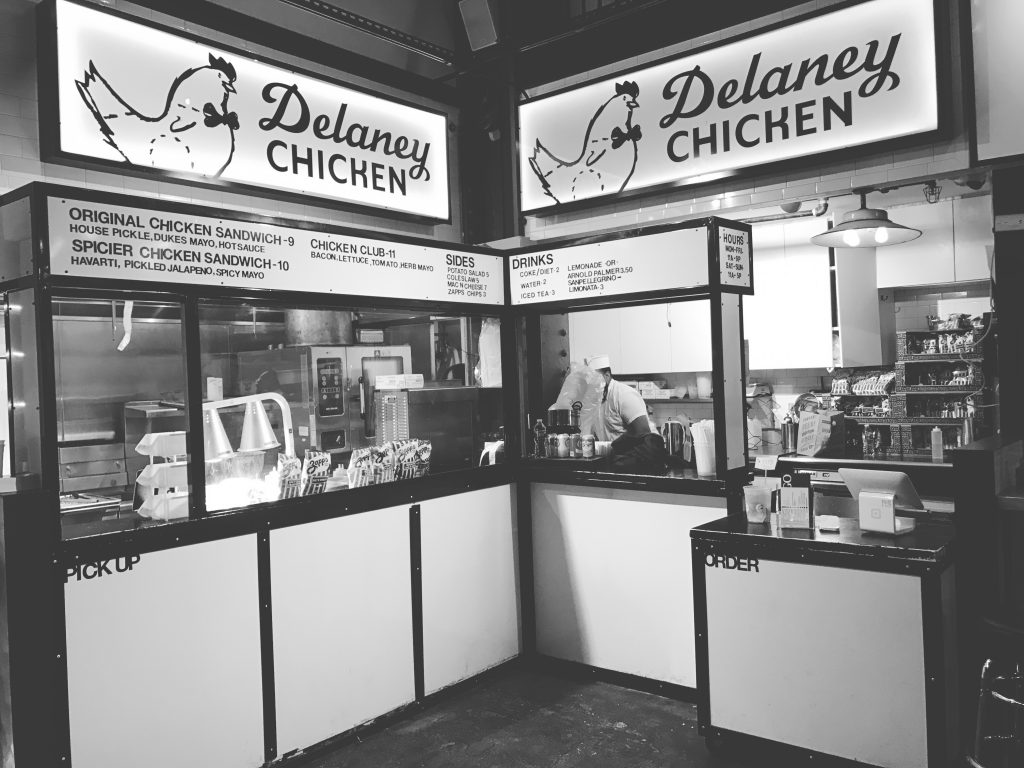 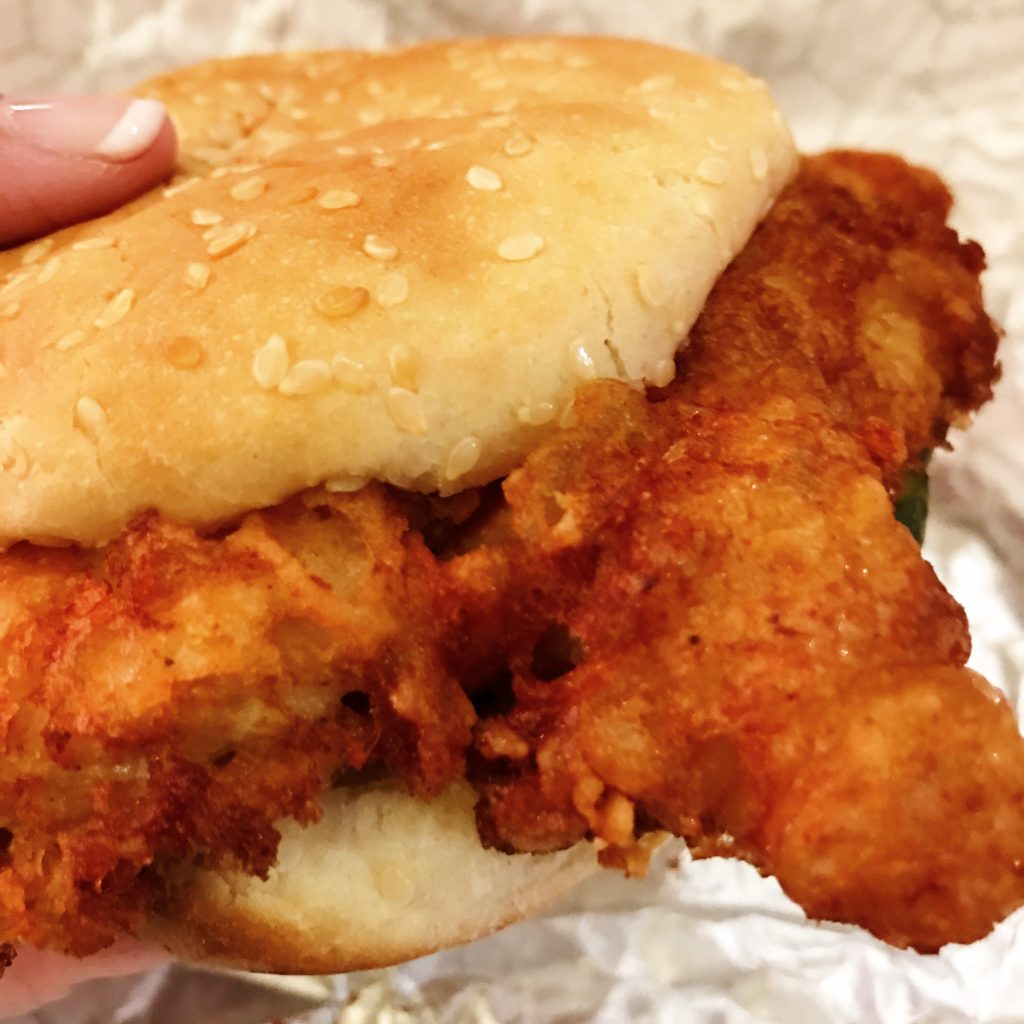 Another fellow training attendee told me I had to try Delaney’s Chicken. I love me some good fried chicken but unfortunately this just wasn’t my style. While it was an ok sandwich it’s not something I would go out of my way to eat again. 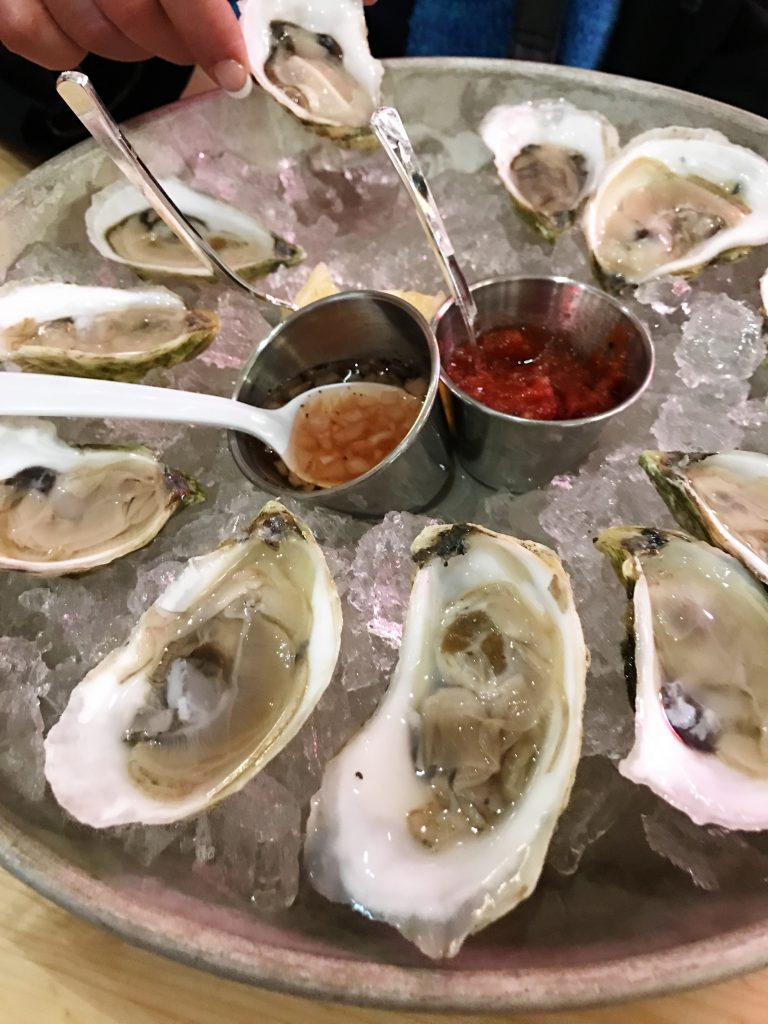 My sister loves oysters and lobsters. I’m not a fan of either but let me tell you about this lobster grilled cheese. Yes, I’d get that again. The crust was so crunchy and the addition of bacon and tomatoes really added to the wonderfulness of the sandwich. 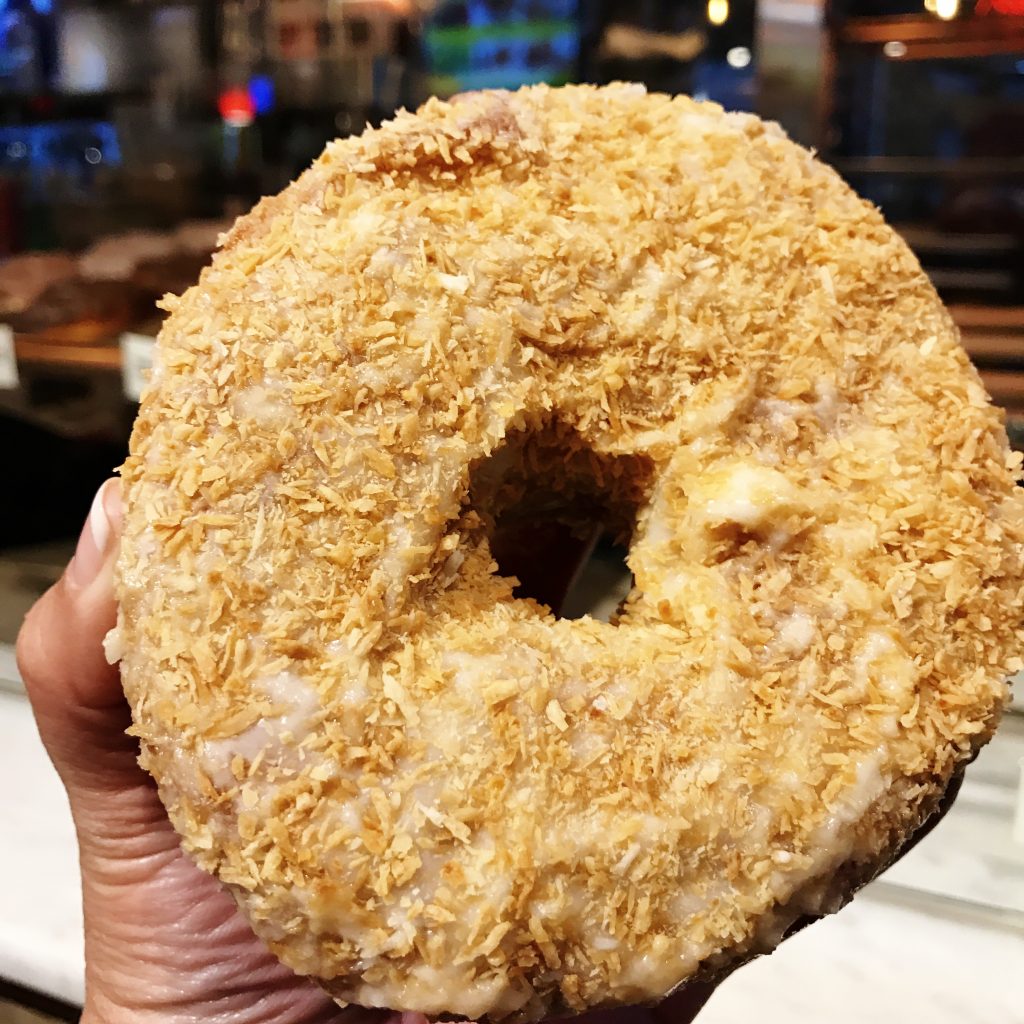 This is a place I didn’t think I’d get to try but it happened to be in this space so I was pleasantly surprised to see it. There were so many flavors to choose from that it took me a minute to decide. We got a coconut flavored doughnut that was infused with flavor and about as big as my head. While I loved the flavor, the doughnut was just so heavy and I’m used to a lighter doughnut. But if you like heavy doughnuts then you’ll appreciate this one. 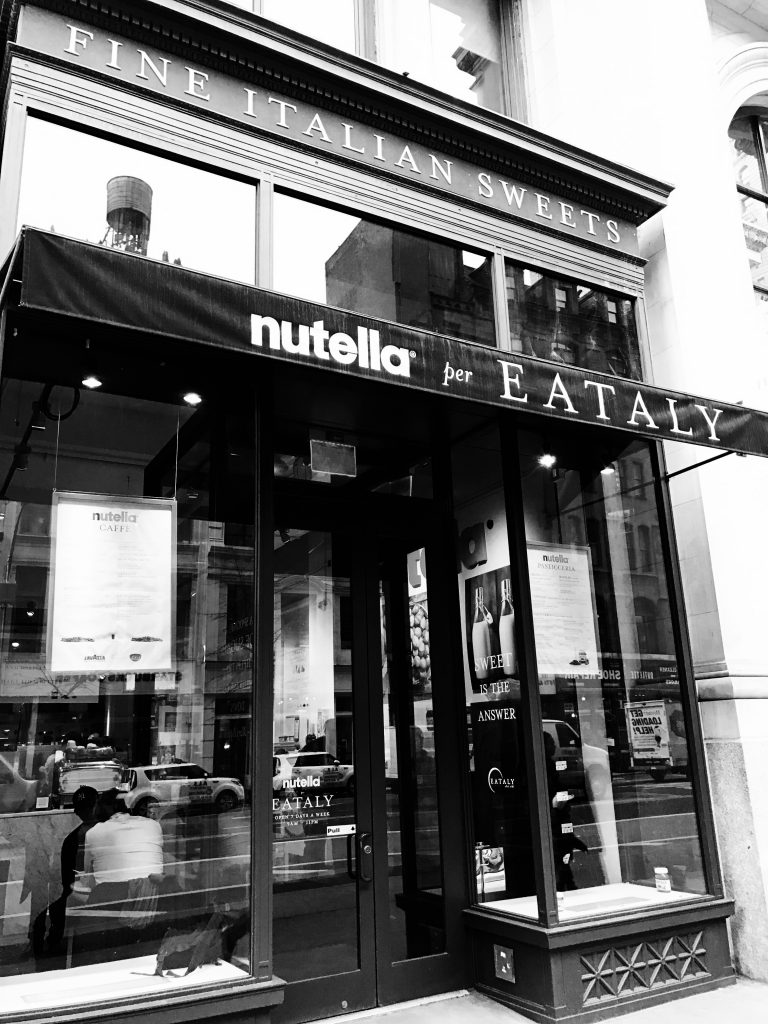 On to Eataly. Eataly is an open space that has just about anything you could want food wise. There is fresh food, ready made dishes and kitchen items galore. We walked around a bit but my main reason for going was the Nutella store. Nutella. Store.

The little bitty ice cream cone with Nutella was scarfed down in one bite. 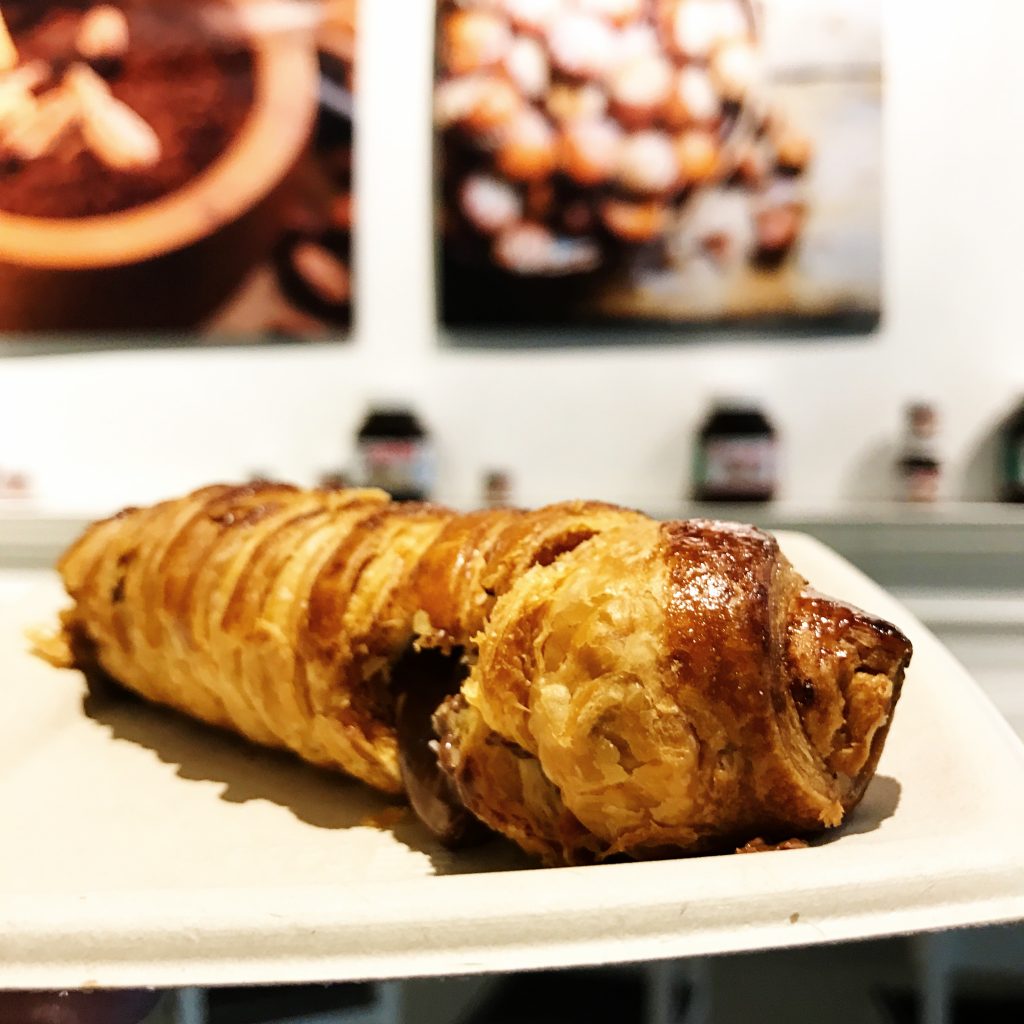 The baklava type dessert was delicious but oh so sweet. I will definitely recreate this here on the blog.

Stay tuned for more of “where to eat in New York” coming soon.