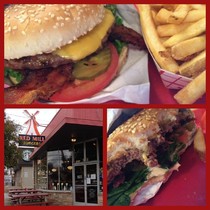 I’ve never been to Seattle before so I was really looking forward to this little side trip from Vancouver. One place I knew I wanted to go to was Red Mill Burgers because it was on the GQ List of 20 Burgers – you know the one.

This was a little dive of a place so you knew these burgers were going to be good. You walk in and there isn’t much to the place but a few tables and some bar seating. It’s self-seating and you go up and place your order. I got the Bacon Deluxe with Cheese because that’s what made the list. While it was great, it didn’t knock my socks off which has been the case with most of the burgers on the list.

After spending some time at Pike Place Market – and oh em gee, if I lived in Seattle I’d probably spend all my time and money there buying everything fresh – I went down the street to Seatown. This is one of Tom Douglass’s restaurants. I should have looked at the menu before I walked in. I went in for happy hour and what the waitress recommended, Jasmine Rice Congee, was not at all in line with my tastes. Eh. I tried something new at least.

After having a drink there, I went a couple of storefronts down to another Tom Douglas restaurant, Etta’s. The hostess wouldn’t even seat me because I was alone. She said basically it was either the bar or nothing even though there were a couple of tables open. Luckily the bartender was the nicest and most attentive person ever so he more than made up for her surliness.

And the food was delicious. I had calamari to start and it was just the thing I needed. Then I had a crab cake and it, too, was scrumptious. I ended up taking a slice of coconut cream pie for dessert later that night and woah was it good. So sweet and the crust was amazing.

My last dinner in Seattle was at Duke’s Chowder House. When I went online looking for a good seafood place this is what came up so I thought I’d give it a try. The chowder was simply divine. I mean really really good. Their award-winning Caesar salad was not to my liking. It was fine but the dressing wasn’t he best. The fish and chips were good too but all I could think about while eating it was that chowder!

All in all I had some good food in Seattle. And what a eautiful city.